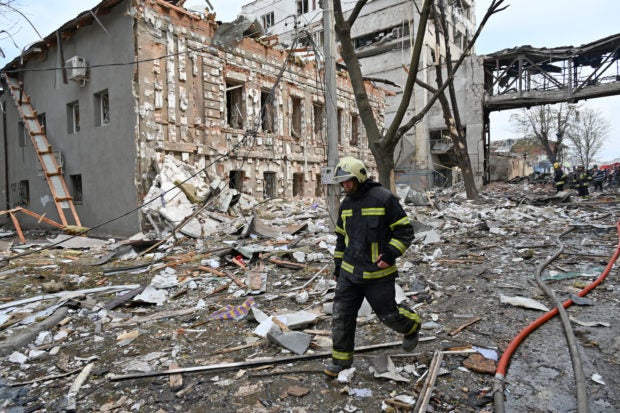 A rescuer walks past buildings destroyed following bombardment, killing two people and injuring eighteen others according to the prosecutors’ office of Kharkiv region, in the Ukrainian city of Kharkiv on April 16, 2022. AFP

KHARKIV, Ukraine—In the aftermath of Saturday’s strike on Ukraine’s second city of Kharkiv the scent of yeast hangs in the air.

Incoming fire in the city center has turned an industrial kitchen inside out, pitching loaves of bread into the street.

Now they are sodden, from fire hoses, mingled with other absurd and macabre debris. A single misplaced shoe, scorched mannequins from a textiles outlet next door, a whole raw chicken, a Harry Potter novel.

The smell of bread blends with the acrid odour of burnt out cars. A walkway spanning the road is crumpled like an accordion. To the side, the balconies of an apartment block have been dismantled by the shockwave.

Officials said two people were killed and 18 injured here, adding yet more deaths to the toll of Russia’s military invasion of Ukraine.

Nearby his car has been totally savaged by the force of the attack.

When it came he was making bread in the kitchen, which hands out free food to residents hunkered down in the besieged city.

“The blast was so big that at first we didn’t understand what was happening,” the 52-year-old volunteer worker told AFP. “When the walls started moving we all knew we had to get out.”

Kharkiv is one of the places where President Vladimir Putin has refocussed his military campaign after calling off a push to take the capital of Kyiv at the end of March.

Just 21 kilometers (13 miles) from the border with Russia, the city has been under near constant bombardment in recent days as the Kremlin ramps up its eastern offensive.

On Friday authorities said 10 people were killed and 35 injured by Russian shelling in a residential district of Kharkiv.

One man died as he smoked at the garden window of his family home, his mother told AFP as the body was collected.

Throughout the early hours of Saturday AFP heard regular salvos of incoming and outgoing fire.

Manager Dmytro Kamykin clambers into the volunteer kitchen, demolished by fire at around 11.30 am.

The roof has been stripped off by the force of the strike. The floor is covered in fallen wall panels.

Out on the street one charred car is full of cooking implements — a frying pan, a set of knives and four pots nested inside each other.

“Three cars came with volunteers. They were severely injured and all bleeding,” said Kamykin, 56.

Three fire engines are parked up along the street. Hoses sprawl out across the ground, pumping water into smoking windows frames.

Under foot there is a river of water coursing through mounds of brickwork and warped metal.

“Near here a young man was killed,” Kamykin added with a resigned tone.

“You could see the blood on the asphalt. I ran to him but he was already dead.”