Pacquiao mum on defection of supporters from other camps | Inquirer News

Pacquiao mum on defection of supporters from other camps 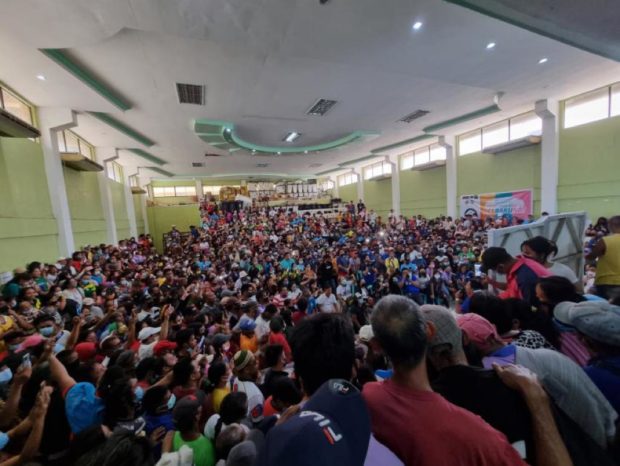 Supporters in Misamis Oriental gather to see their candidate Senator Manny Pacquiao, who visited the province during a campaign sortie. Contributed photo

MANILA, Philippines — Presidential aspirant Sen. Manny Pacquiao is not affected by the latest defection of a volunteer group identified with Manila Mayor Isko Domagoso to the camp of Vice President Leni Robredo as he thanked his supporters who braved the rain and ignored the power outages just to see him and show their love and support.

Pacquiao, who is running under Probinsya Muna Development Initiative (PROMDI), said the shift of the group Ikaw Muna Pilipinas (IM Pilipinas) to IM Leni is an issue that can be only addressed by Domagoso and its leader Tim Orbos.

He pointed out however that the Orbos group’s defection will not necessarily benefit Robredo or even Marcos because it is more likely that the group’s supporters will shift their support to Pacquiao.

He also dismissed claims that Marcos would get Domagoso’s supporters following Orbos’s defection.

READ: Pacquiao believes some Isko Moreno supporters will shift to him, not to Robredo

Pacquiao is on his second day of his sorties in Western and Northern Mindanao hoping to consolidate his support in Mindanao being the only Mindanaoan candidate.

Amid heavy rains and a series of brownouts, Pacquiao supporters patiently waited at the Zamboanga del Norte Provincial capitol gymnasium to show their support for Pacquiao and his wife Jinkee Monday night.

The rain continued throughout the next day as Pacquiao barnstormed through the towns of Polanco, Piñan, Rizal, and Sapang Dalaga in Zamboanga del Norte before going to the towns of Calamba and Plaridel in Misamis Occidental for a quick meet-and-greet with leaders and supporters.

In Sapang Dalaga and Calamba, people braved the heavy downpour as they flooded the streets to see Pacquiao.

Pacquiao said this demonstration of love and support for his candidacy is fueling his optimism that he will win the presidency.

Pacquiao said the sight of throngs of rain-drenched supporters is providing him the strength and energy to push for his candidacy because this is the only way that he can accomplish his mission to uplift the lives of all Filipinos, especially the poor.