Cristina Corona seen to ‘connect the dots’ on bank deposits 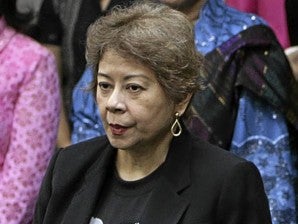 The Senate impeachment court expects the wife of Chief Justice Renato Corona to “connect the dots” when she testifies next week on his bank deposits with Philippine Savings Bank (PSBank).

But only the Chief Justice himself could justify the discrepancies in his statements on his properties and bank deposits, said Senator Gregorio Honasan.

“What’s next for the defense? Present the Chief Justice who is the best evidence and the best witness. Only he can explain many things, including the bank accounts. No other witnesses can do so,” Honasan said in a phone interview.

He said Senate President Juan Ponce Enrile, the prosecution and the public had called on Corona to take the witness stand.

“Theirs is a unanimous call for the Chief Justice to appear and defend himself not only in the court, but in the eyes of the Filipino people,” Honasan said.

In a phone interview, Senator Francis Pangilinan welcomed the decision of the defense panel to call Cristina Corona, saying her testimony could “connect the dots.”

“Because it’s voluntary,” Pangilinan said when asked why Corona’s wife could take the stand now after the court denied this on Day 2 of the trial, citing the ban on family members testifying against each other under Rule 30 of the Rules of Court.

“Let’s wait for what she says,” he said.

Cristina Corona will testify on the couple’s bank records and the Chief Justice’s statements of assets, liabilities and net worth (SALN).

On Thursday, Romulo Macalintal, a lawyer and impeachment analyst, said that members of the House of Representatives could not decline summons by the defense team to testify in the impeachment trial by invoking interparliamentary courtesy or legislative privilege.

“Interparliamentary courtesy and legislative privilege do not apply in impeachment cases since both the senators and the representatives, when taking their respective roles as judges and complainants, are performing nonlegislative functions. Such could only be invoked when they are in the performance of their regular legislative functions as lawmakers,” Macalintal said in a statement.

Furthermore, Section 15 of the same rules does not provide that members of the House cannot be called to the witness stand, he added.

“If a congressman can file an impeachment case, then it follows that he can be called to the witness stand to prove the allegations in his complaint. He can be called to testify on direct examination by the prosecution or as a hostile witness by the defense panel in the highest interest of justice and in pursuit of truth and due process,” Macalintal said.

Corona’s defense lawyers earlier said they would summon six congressmen, including three who did not vote for the articles of impeachment. The other three were reportedly members of the House prosecution panel.

Batangas Representative Hermilando Mandanas and Deputy Speaker Crispin Remulla, who both did not sign the articles, said they would not testify without subpoenas.