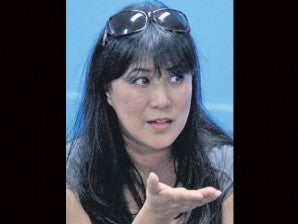 Ana Basa, a member of the Basa-Guidote clan, denied the accusation of Chief Justice Renato Corona that her decision to surface and talk about the abuses of the Chief Justice and his wife Cristina was part of a “professional hatchet job” being carried out by the law firm of Senior Associate Justice Antonio Carpio.

“That is not true. I don’t even know Justice Carpio. I don’t have any idea how he looks like. I’ve never talked with him, I’ve never met him,” said Ana, an American citizen and first cousin of Cristina.

In his interviews with a “friendly” television network on Wednesday, Corona lambasted Ana for accusing him and his wife of having brought injustice and sufferings to the Basa-Guidote clan by seizing control of  Basa-Guidote Enterprises Inc. (BGEI). He insisted that Ana’s revelations were “all lies.”

“I came here for a vacation with my brothers and sisters. We’re supposed to have a quiet life but all of a sudden, you guys came here. You’re good, you found me. Ang galing ninyo nga eh,” she told the Philippine Daily Inquirer.

“What can I do? I was agonizing whether I should talk to you but since you were already here, we (siblings) talked among ourselves whether to grant the interview,” she said.

The Inquirer found Ana and her siblings last week through a contact who knew of their arrival in the country.

It took the Inquirer nearly four hours to finally convince Ana and her siblings to accede to the interview and to be photographed as she still had to clear it with her lawyers.

She said though that questions on the merits of their pending cases in connection with BGEI against Cristina would not be touched during the interview.

“Well I know the PDI newspaper.  I see your newspaper everywhere and it’s a well-respected newspaper. So sabi ko nga, tutal andito na rin lang kayo, it’s time for me to talk and tell the truth. That’s it,” she added.

The prosecution panel’s spokespersons just laughed off Corona’s claim that the surfacing of Ana was a “professional hatchet job” being carried out by CVCLaw.

Marikina Representative Romero Quimbo said that on the contrary, it was the prosecution members and their spokespersons who had been victims of black propaganda from the other side, citing for instance his alleged mansion which he vehemently denied.

Quimbo said the prosecution welcomed Corona’s decision to finally come out to defend himself against the allegations against him. Corona has pointed to BGEI as the source of his funds that the prosecution is questioning.

However, Quimbo said the Chief Justice should reiterate the same statements under oath in the impeachment court.

Quimbo said the prosecution believed that Corona’s defense would center on BGEI as the source of the Chief Justice’s questioned funds and therefore should not be included in his statements of assets, liabilities and net worth (SALNs).

Corona also insisted that his woes in the Senate impeachment court stemmed from his decision to block the high court’s decision to dismantle the 4,915-hectare estate of Hacienda Luisita Inc. (HLI), which belonged to President Benigno Aquino III’s clan.

The Chief Justice said HLI wanted a P10-billion compensation from the government before the estate could be distributed to 6,296 registered farm worker-beneficiaries. He said he vehemently opposed this.

But Aurora Representative Juan Edgardo Angara said HLI was never an issue when the impeachment complaint against Corona was still being drafted.

Angara said the main considerations at that time was whether Corona had the probity, integrity and independence required of a Chief Justice.

He said that while the prosecution welcomed the decision of the defense to put Cristina on the witness stand to explain the BGEI property, it should be Corona himself who should explain his SALN and why he “hid” the supposed BGEI money in his account.

Bayan Muna Representative Neri Javier Colmenares said that while Bayan Muna respected the freedom of expression of both the prosecution and the defense, the Corona media interview was “sub judice.”

Going to media, not court

“What is unfortunate is that the defense had long been doing the same but it was always the prosecution who has always been charged with trial by publicity despite the similarly numerous press conferences of the defense,” Colmenares said.

He said it was clear that Corona was afraid of testifying in the impeachment court and would rather say through the media where he cannot be cross-examined and he can choose to avoid answering damaging questions like his link to former President and now Pampanga Representative Gloria Macapagal-Arroyo.