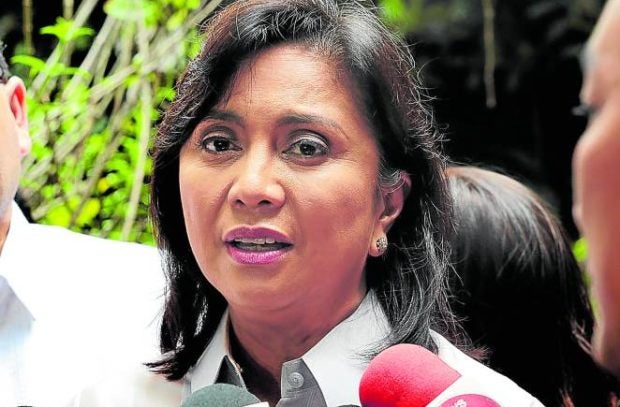 SAN FERNANDO CITY, La Union, Philippines — Vice President Leni Robredo on Tuesday directly accused her political nemesis, Ferdinand Marcos Jr., of spreading the alleged lewd video of her eldest daughter, saying the latest vile attack against her and her family was nothing new.

“I’m not surprised because this has really been the modus of my rival since he lost in 2016,” Robredo said, referring to her victory over the son and namesake of the late dictator in the 2016 vice presidential race.

“Since 2016, I was really hit with all kinds of fake news,” she told reporters after speaking at the “Elyu Pink Wave” campaign rally at Saint Louis College La Union here.

Asked if she was referring to Marcos, the Vice President said: “Of course, because he had been doing that to me since 2016.”

“He had consistently done that since my [survey] numbers picked up [in the run-up] to the 2016 elections … I was at the receiving end of all kinds of lies,” she said.

She noted that the same group of social media “influencers” that Marcos used before were the same ones attacking her now.

Various internet links to a supposed pornographic video of Aika Robredo, a development worker, became a trending topic on social media on Monday, just days after Robredo’s camp received information that her family would be targeted by a smear campaign.

The alleged fabricated scandalous footage surfaced barely a week after the opposition presidential aspirant surged by 9 percentage points in the Pulse Asia survey.

She said Aika and her two younger sisters had also become the target of internet trolls after they decided to actively participate in her campaign.

Aika, 34, and sisters Tricia and Jillian had been the joining the house-to-house campaign organized by supporters of Robredo and her running mate, Sen. Francis Pangilinan, in various parts of the country.

“The way they are handling their campaign will also be their kind of governance—full of lies and mudslinging. They should be highlighting the good in them. They resort to fake news maybe because they really have nothing good to show,” she added.

The Department of Justice (DOJ) has started looking into the alleged lewd video involving Robredo’s eldest daughter that surfaced on social media.

“Our investigation agents are on it,” said Charito Zamora, officer in charge director of the DOJ-Office of Cybercrime (DOJ-OCC).

She added that they will endorse the same to the National Bureau of Investigation-Cybercrime Division if it needs further investigation.

Zamora noted, however, that the camp of Robredo has not yet reached out to the DOJ to investigate the matter.

According to Marcos’ spokesperson and chief of staff lawyer Vic Rodriguez, Marcos has been basing his campaign on his “call for unity anchored on the strengths and merits of his vision and platform for the future of our country, especially the youth, that has resonated throughout the land and we shall keep it that way until the very end.”

Online impunity: Assault on Robredo daughter just one of countless against women in PH