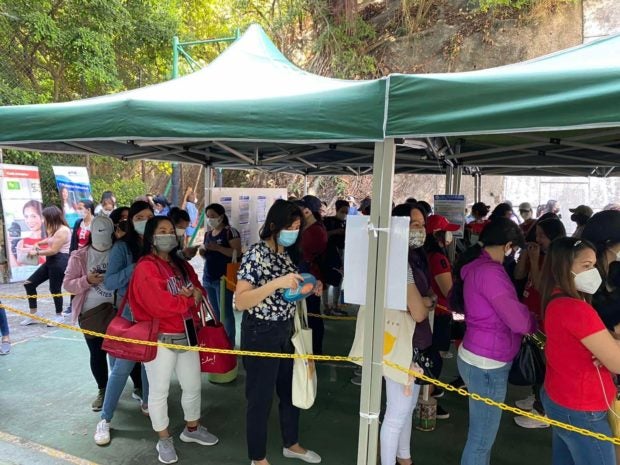 Filipino workers in Hong Kong cue for their turn to cast their vote on the first day of the overseas absentee voting held at the Bayanihan, Kennedy Town Center, Hongkong. Image from the Consul General Raly Tejada / Facebook

MANILA, Philippines — As the overseas absentee voting began in other countries where there are a concentration of Filipinos, the Commission on Elections (Comelec) on Monday issued a reminder to be wary against believing in exit polls.

An exit poll is done when a party asked a voter exiting from a polling center who he/she voter for, the purpose of which was to determine the initial outcome of the elections through unreliable methods.

(Don’t immediately believe exit polls. It is not submitted to the Comelec. Who commissioned that exit poll? And what are the ways to compute the results?)

Garcia said that the results of exit polls are not accurate and the public should just wait for the election’s official tally.

(The exit poll may be conducted but it is not that accurate. We do not know or they do not know if the right questions were being asked.)

(What’s important is to believe the May 9 election results.)

But while the Comelec respects exit polls, Garcia said the commission will be compelled to take action if it undermines the integrity of the electoral process.

Absentee voting for Filipinos overseas started on Sunday, but it was off to a bad start, with some voters in Hong Kong and North America describing the first day of voting as “chaotic and disorganized,” with ballots and other election paraphernalia from Manila getting stalled in transit in Alaska.

A record 1,697,215 registered overseas absentee voters were set to cast their vote for national candidates on April 10 until Election Day on May 9. Overseas voters may only vote for president, vice president, 12 senators, and a party list group.