Romualdez rivals in Leyte back Marcos 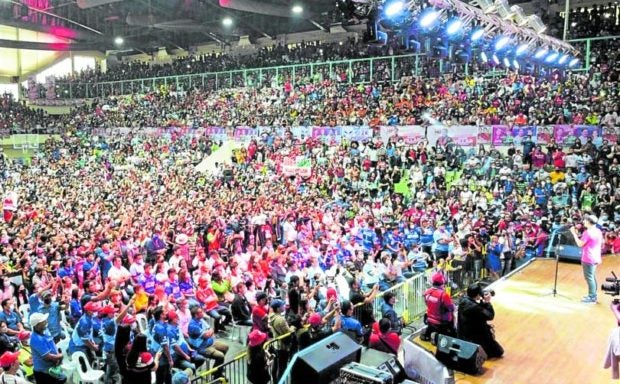 In the capital city of Tacloban, the Leyte Sports Complex overflowed with an estimated 200,000 people—the biggest ever seen in the province.

The biggest surprise, however, came from the archrivals of the Romualdez family in Leyte—the Petilla family, which came out in support of Marcos Jr. and his UniTeam running mate, vice presidential candidate Mayor Sara Duterte.

“Who else can usher in development in our province, but someone from Leyte,” Leyte Gov. Leopoldo Dominico Petilla declared at UniTeam’s rally in Baybay City on Saturday morning.

“Let’s support Bongbong and let’s not forget our vice president, who also has Leyte blood in her veins. Inday Sara Duterte is also from Leyte,” he said.

The Leyte Sports Complex has a capacity of only 75,000, but the Tacloban City Police Office said the crowd reached 150,000 as the complex was jampacked and the people flowed outside. Organizers claimed the crowd inside and outside the complex reached at least 200,000.

The large turnout in Tacloban made Marcos emotional as many people came despite the strong rains spawned by Tropical Depression “Agaton” on Saturday night.

“I can’t help but shed a tear, because this is the first time I heard ‘Lupang Hinirang’ sung by this many people. This reminds us of how much we love the Philippines and its people,” Marcos told the crowd.

He said his mother, former first lady Imelda Romualdez-Marcos who is from Leyte, wanted to come back to her home province but the 92-year-old matriarch was advised not to travel due to COVID-19.

But Marcos said Imelda was watching the livestreamed rally from Manila.

The first rally was attended by about 60,000 people in Baybay City, where the Petillas declared their support for Marcos and Duterte.

Carlos Jericho Petilla, the energy secretary during administration of the late President Benigno Aquino III, also declared his support for Marcos’ UniTeam. He is running to succeed his brother as governor.

On stage, Leopoldo sat beside Leyte Rep. Ferdinand Martin Romualdez, a cousin of Marcos. Leopoldo is the son and namesake of the late Leyte governor and Liberal Party stalwart Leopoldo “Polding” Petilla.

From Baybay, Marcos and his party went to Ormoc City for another rally where they were endorsed by Leyte Rep. Lucy Torres Gomez and her husband, Ormoc City Mayor Richard Gomez before a crowd of 20,000 people.

After Ormoc, the group then proceeded to Tacloban for the grand rally at Leyte Sports Complex.

The Leyte governor said he commissioned a survey in Leyte, which showed that 70 to 80 percent of voters expressed support for Marcos.

“It doesn’t mean the remaining 20 or 30 percent would go to just one candidate,” the governor pointed out.

Petillas of Leyte back Marcos-Duterte tandem