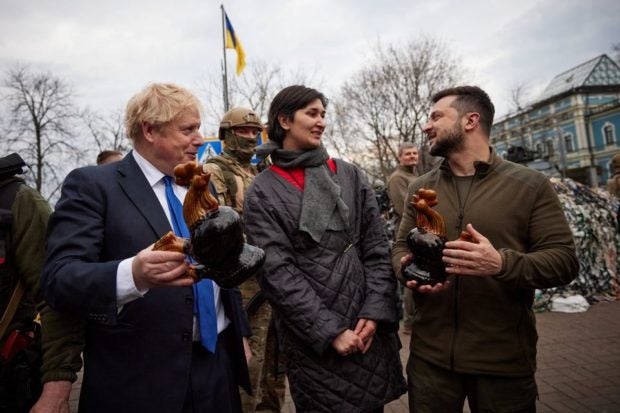 KYIV — Ukraine is ready for a tough battle with Russian forces amassing in the east of the country, President Volodymyr Zelensky said on Saturday, and British Prime Minister Boris Johnson offered fresh financial and military support during a surprise visit.

At a meeting in Kyiv, Johnson told Zelensky that Britain would provide armored vehicles and anti-ship missile systems, along with additional support for World Bank loans.

Britain also will continue to ratchet up its sanctions on Russia and move away from using Russian hydrocarbons, he said.

Johnson was the latest foreign leader to visit Kyiv after Russian forces pulled back from areas around the capital just over a week ago. read more

Earlier in the day, the Ukrainian leader met Austrian Chancellor Karl Nehammer in Kyiv, warning in a joint news conference that while the threat to the capital had receded, it was rising in the east.

“This will be a hard battle, we believe in this fight and our victory. We are ready to simultaneously fight and look for diplomatic ways to put an end to this war,” Zelensky said.

Ukranian negotiator Mykhailo Podolyak said Zelensky and Russian President Vladimir Putin would not meet until after the country defeated Russia in the east, which would bolster its negotiating position.

“We are paying a very high price. But Russia must get rid of its imperial illusions,” he said, according to the Interfax Ukraine news agency.

Air-raid sirens sounded in cities across eastern Ukraine, which has become the focus of Russian military action after the withdrawal from around Kyiv.

Ukrainian officials have urged civilians in the east to flee. On Friday, officials said more than 50 people were killed in a missile strike on a train station in city of Kramatorsk in the Donetsk region, where thousands of people had gathered to evacuate.

Russia’s invasion, which began on Feb. 24, has forced around a quarter of the population of 44 million to leave their homes, turned cities into rubble and killed or injured thousands.

The civilian casualties have triggered a wave of international condemnation, in particular over deaths in the town of Bucha, a town to the northwest of Kyiv that until last week was occupied by Russian forces.

“We will never forget everything we saw here, this will stay with us for our whole lives,” said Bohdan Zubchuk, a community policeman in the town, describing his life before and after the war. read more

Russia has denied targeting civilians in what it calls a “special operation” to demilitarize and “denazify” its southern neighbor. Ukraine and Western nations have dismissed this as a baseless pretext for war.

At least 52 die at station

Friday’s missile attack at the station in Kramatorsk, a hub for civilians fleeing the east, left shreds of blood-stained clothes, toys and damaged luggage strewn across the station’s platform.

City Mayor Oleksander Honcharenko, who estimated 4,000 people were gathered there at the time, said on Saturday that the death toll had risen to least 52.

Ukraine said 4,532 people were evacuated from its cities on Saturday, down from 6,665 the day before.

Russia has denied responsibility, saying the missiles used in the attack were only used by Ukraine’s military. The United States says it believes Russian forces were responsible.

Reuters was unable to verify the details of attack.

The Ukrainian military says Moscow is preparing for a thrust to try to gain full control of the Donbas regions of Donetsk and Luhansk that have been partly held by Moscow-backed separatists since 2014.

The British Defense Ministry said air attacks are likely to increase in the south and east as Russia seeks to connect Crimea – which Moscow annexed in 2014 – and the Donbas, but Ukrainian forces are thwarting the advance.

Russia’s military said on Saturday it had destroyed an ammunition depot at the Myrhorod Air Base in central-eastern Ukraine. read more

Video posted on Twitter showed Johnson and Zelensky, flanked by soldiers, walking through central Kiev to a memorial marking the 2014 Maidan Revolution.

The EU on Friday adopted new sanctions against Russia, including bans on the import of coal, wood, chemicals and other products. Oil and gas imports from Russia so far remain untouched. read more

Zelenskiy urged the West to adopt a complete embargo on Russian energy products and supply more weapons to Ukraine.

“Russia can still afford to live in illusions and bring new military forces and new equipment to our land. And that means we need even more sanctions and even more weapons for our state,” he said in a late-night address.

The visits by foreign leaders were a sign that Kyiv was returning to some degree of normality after the Russian retreat. Some residents have begun to return to the capital, with cafes and restaurants reopening, and Italy said it plans to re-open its embassy in the city later this month.

Read Next
Man nabbed in Calapan City drug buy-bust
EDITORS' PICK
Beyond the Chocolate Hills: A farm-to-table, heritage culinary adventure of Bohol
MyCitiHomes premiers PH’s first 3-star certified BERDE District residential development
‘Crash Landing on You’ couple confirms pregnancy
Enrile contracts COVID-19: ‘To my critics and enemies, I am not going to die yet’
Metro Manila’s COVID-19 positivity rate jumps from 3.9% to 5.9% — OCTA
House energy committee chair Arroyo bats for cheap electricity
MOST READ
Enrile contracts COVID and snipes at critics, foes: ‘I am not going to die yet’
Duterte: It was correct for Bongbong Marcos to ‘decline’ presidential debates
Russia steps up missile strikes on Ukraine as G7 leaders gather
PH firm partners with US corporation to set up weapons assembly in Bataan
Don't miss out on the latest news and information.