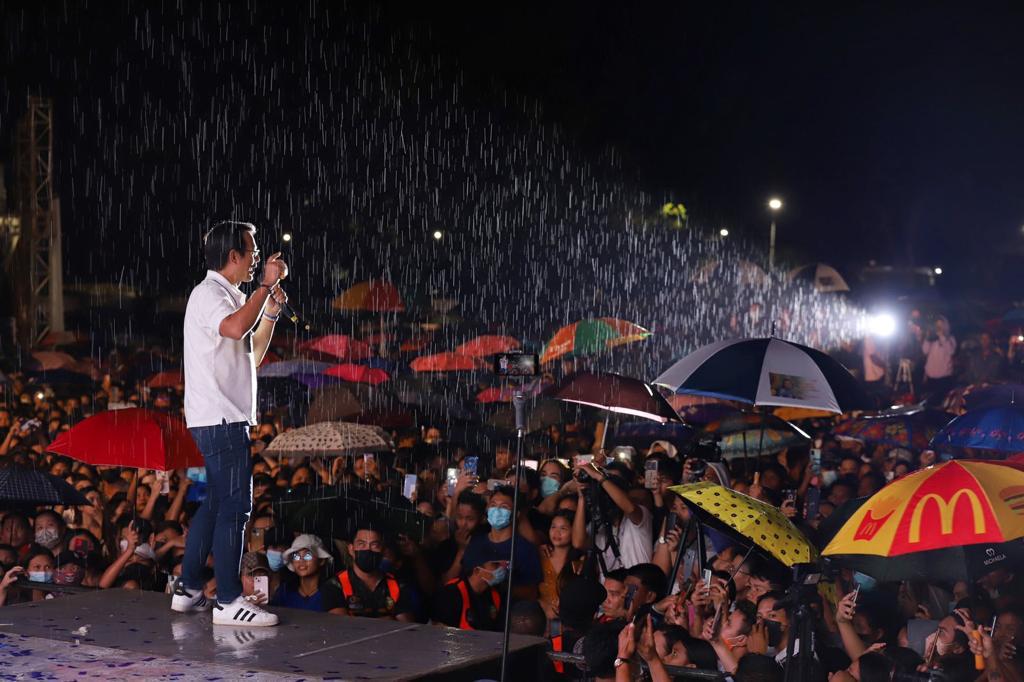 CEBU CITY – Aksyon Demokratiko standard bearer Isko Moreno Domagoso vowed Saturday that given the chance, he will seek stronger international trade agreements and institute tangible national programs and policies that will ensure that the overall welfare of overseas Filipino workers (OFWs) will be protected in their host countries.

“Under our watch, we will make sure that there will be equal opportunity and equal protection under universally accepted laws para sa ating OFW at undocumented OFWs sa mundo. So anong proteksyon ang mabibigay natin sa kanila, documented and undocumented, kung wala namang batas o kasunduan na umiiral between the Philippines and the host country,” Moreno said.

According to the Philippine Statistics Authority (PSA), there was an estimated 1.77 million OFWs in 2020. However, only 1.71 million of these have existing work contracts. Other OFWs who worked abroad without working visa or work permits such as tourist, visitor, student, medical, and other types of non-immigrant visas but were presently employed and working full time in other countries accounted for 3.6 percent, or 63,810, of the total.

By sex, more women were reported to be working overseas, accounting for 59.6 percent or 1.06 million, majority of which (70.3%) were engaged in “elementary occupation” that include household service workers, cleaning and kitchen staff, and others involved in manual labor.

The situation has given rise to a number of abuses against OFWs, with 4,302 cases of abuse recorded in 2020 in the Middle East alone.

“I think we are in the right direction na it’s high time for us to enter into bilateral labor agreements with host countries na wala tayong agreement. And I think Saudi for that matter, it’s high time na wala namang masamang hingin yung marapat lamang,” Moreno pointed out.

“Ano yung marapat? Na bigyan proteksyon sa mata ng batas, and other services, while our fellow Filipinos are working with them,” he said.

To further protect OFWs, the Manila city mayor vowed to hire highly-qualified individuals at the Philippine Overseas Labor Office (POLO) in our embassies.

In earlier interviews, Moreno pointed to past practices where appointed POLO officers were not career officers. “Nangyari naging turista yung POLO officer natin. Parang walang ka ide-idea kung ano ang gagawin. Sad to say that is the general sentiment when I spoke with Middle East and some European OFWs,” he said.

“So we’ll make sure that we put somebody there representing the country in the embassy to really address the real situation and give attention, yung nakakausap ng mga OFWs,” said Moreno.

The 47-year-old presidential candidate of Aksyon Demokratiko also vowed to institute programs for the reintegration of returning OFWs in the Philippine economy.

According to the Department of Labor, more than 800,000 OFWs returned to the country since the onset of the pandemic.

“Given the chance they are going back, we must have a plan how to integrate them. In my case, two things. If they wanted to go back to farming, then Department of Agriculture should make assistance for returning OFWs for integration in our society,” Moreno said.

But more than protecting the OFWs or planning for their reintegration, Moreno has already unveiled plans to minimize the migration of our workers abroad by providing the much-needed jobs here in the country.

If elected president, Moreno has vowed that if elected, he will pursue a “Life and Livelihood” economic policy that aims to address poverty, hunger, unemployment, inequality and social injustice through an inclusive and equitable infrastructure development program as spelled out under his 10-point Bilis Kilos Economic Agenda.

To achieve this, the first two years of an ‘Isko Moreno presidency’ will focus on building facilities that will provide the minimum basic needs of the people – quality housing, education and health care, and creating jobs and livelihood opportunities.

Under his accelerated infrastructure program, infrastructure development will be focused in areas or provinces with low human development index (HDI), particularly in Mindanao and the Visayas, to bring about a more inclusive economic growth.

To further hasten human and economic growth, Moreno also vowed to strengthen physical, economic and digital linkages among growth centers and the rural economies, as well as promote and strengthen medium, small and micro enterprises (MSMEs) to further provide livelihood and job opportunities.

Additionally, Moreno said among the first economic policies that his government will introduce is to cut the excise tax of petroleum products and electricity to attract foreign direct investments (FDIs) in the country.

EXPLAINER: A new department for OFWs, migrant Filipinos: What is it?

Read Next
War in Ukraine: Latest developments
EDITORS' PICK
Percy Lapid’s kin: ‘We demand that his cowardly assassins be brought to justice’
Nothing’s certain so here’s how everyday Filipinos can make the most out of their Plan B
Do all the things you do, faster
PNP vows to bring justice for slain Percy Lapid; says probe underway
House energy committee chair Arroyo bats for cheap electricity
‘Seniority’ requirement despite vacant posts in DOH bothers senators
MOST READ
Student stabs teacher dead in Samar town
Trixie Angeles quits as press secretary due to health reasons
Not rehired?: Trixie Angeles not on list of reappointed Cabinet execs
Heart Evangelista to stay abroad ‘indefinitely’: ‘Hindi muna ako babalik’
Don't miss out on the latest news and information.