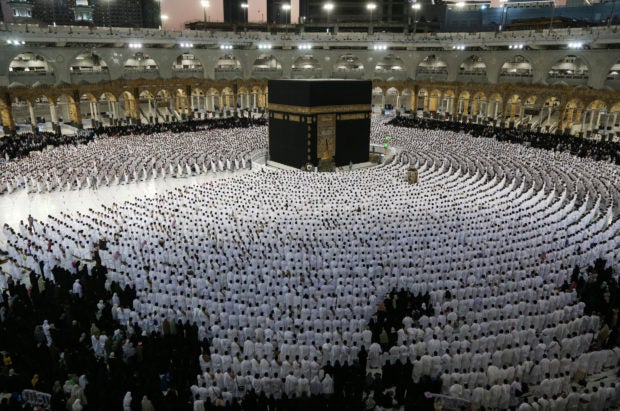 Muslims pray around the Kaaba, Islam’s holiest shrine, at the Grand Mosque complex in the Saudi city of Mecca, during the fasting month of Ramadan, on April 9, 2022. AFP

RIYADH—Saudi Arabia said Saturday it would permit one million Muslims from inside and outside the country to participate in this year’s hajj, a sharp increase after pandemic restrictions forced two years of drastically pared-down pilgrimages.

The move, while falling short of reinstating normal hajj conditions, offered hopeful news for many Muslims outside the kingdom who have been barred from making the trip since 2019.

One of the five pillars of Islam, the hajj must be undertaken by all Muslims who have the means at least once in their lives. Usually one of the world’s largest religious gatherings, about 2.5 million people took part in 2019.

But after the onset of the coronavirus pandemic in 2020, Saudi authorities allowed only 1,000 pilgrims to take part.

The following year, they increased the total to 60,000 fully vaccinated Saudi citizens and residents chosen through a lottery.

This year the Saudi hajj ministry “has authorised one million pilgrims, both foreign and domestic, to perform the hajj”, it said in a pre-dawn statement Saturday.

The pilgrimage, which will take place in July, will be limited to vaccinated Muslims under age 65, the statement said.

Those coming from outside Saudi Arabia, who must apply for hajj visas, will this year also be required to submit a negative Covid-19 PCR result from a test taken within 72 hours of travel.

The government wants to promote pilgrims’ safety “while ensuring that the maximum number of Muslims worldwide can perform the hajj”, the statement said.

The hajj consists of a series of religious rites that are completed over five days in Islam’s holiest city, Mecca, and surrounding areas of western Saudi Arabia.

Authorities took a number of special measures to reduce the spread of the coronavirus last year, including dividing pilgrims into groups of 20 and handing out disinfectants, masks and sterilised pebbles for the “stoning of Satan” ritual.

But the relatively small crowds were distressing to Muslims abroad.

“We have been in great sadness and pain in the past two years because of the small number of pilgrims. The scene was horrible,” 36-year-old Cairo resident Mohamed Tamer said Saturday.

“I am very happy that the hajj will return to normality to some extent,” he added, though he also expressed worry about rising costs for flights and hotels.

Reactions to Saturday’s announcement were generally positive on social media, though some Twitter users voiced concern about what would happen to pilgrims who financed trips to Mecca — only to have their plans ruined by a positive Covid-19 test.

Others criticized the age cap.

“Such great news, but imposing age restrictions is heartbreaking for many aged hajj aspirants,” one user wrote in response to the hajj ministry’s announcement.

Zeinab Mostafa, 71, told AFP from her home in Cairo that the rules “dashed my hopes to perform hajj before death”.

“My dream to perform Hajj is lost,” she added through tears.

Hosting the hajj is a matter of prestige for Saudi rulers, as the custodianship of Islam’s holiest sites is the most powerful source of their political legitimacy.

Before the pandemic, Muslim pilgrimages were key revenue earners for the kingdom, bringing in some $12 billion annually.

The kingdom of approximately 34 million people has so far recorded more than 751,000 coronavirus cases, including 9,055 deaths, according to health ministry data.

In early March it announced the lifting of most Covid restrictions including social distancing in public spaces and quarantine for vaccinated arrivals, moves that were expected to facilitate an increase in Muslim pilgrims.

The decision included suspending “social distancing measures in all open and closed places” including mosques. Masks are now only required in closed spaces.