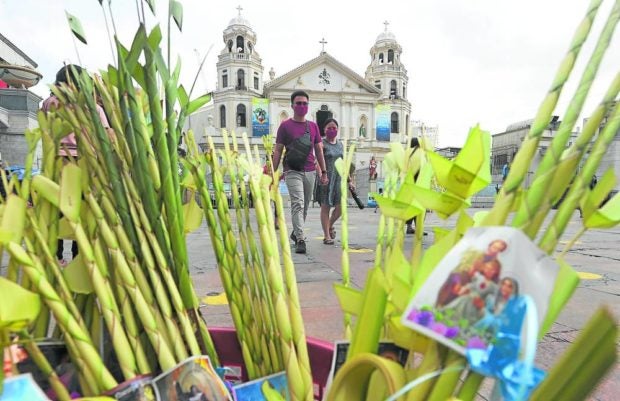 HOSANNA! For Filipino Catholics, this year’s Holy Week may be unique in certain ways. There’s a collective sigh of relief over the lifted pandemic restrictions, but also a mix of hope and anxiety over the coming May elections. But then such earthly affairs may ultimately count little for those who today, Palm Sunday, are welcoming Christ into their personal Jerusalems. —MARIANNE BERMUDEZ

The gravity of the offense diminishes if netizens are not aware that they are sharing fake news. But they will still be guilty of the sin of omission if they fail to check the credibility of the information in a post as well as its source before sharing it.

Two scholars of theology are sounding this warning as concern grows about the prevalence of fake news, especially in the run-up to the May 9 elections. The seriousness of the issue has already prompted Meta, the parent company of the social media platform Facebook, to remove accounts that spread misleading content.

“Conscious or deliberate spreading or promoting of fake news violates the eighth commandment [that says] ‘Thou shall not bear false witness against your neighbor,’” says Fr. Angelo Paolo Asprer of the Society of St. Paul.

Asprer, who holds a bachelor’s degree in sacred theology and a master’s degree in theological studies from Ateneo de Manila University (Admu), explains that every lie is an offense against justice and charity and “sows seeds of division in the human community of God.”

Fr. JayAr Babor of the Missionaries of the Sacred Heart, a professor of moral theology at Admu’s Loyola School of Theology, says forwarding fake news is not only harmful to others but is also deception.

Says Asprer: “We are called to be truthful, responsible and accountable for our words and actions … If a person does not know that what he is posting or sharing is fake news, a person may not be committing a mortal sin [directed against God or life with full knowledge or consent], but it can be a venial sin that disrupts the relationship with God.”

Babor notes that while the moral responsibility diminishes in such cases, it does not exempt the person from sin.“Before forwarding, [a netizen] should check first … whether the source is credible or not. Otherwise, the person is committing the sin of omission,” he says.

The Catholic Church encourages the faithful to seek absolution before accepting the body of Christ during communion. A priest grants absolution when a person receives the sacrament of penance during confession.

Asprer and Babor warn that netizens who use cartoon characters, logos and such as avatars in their social media profiles to protect their identities cannot use anonymity as a defense.

According to Asprer, once the intent to spread fake news to destroy another person’s reputation is established, it no longer matters whether a person uses a real photo or a cartoon character as an avatar.

Babor adds that the use of a different image to conceal one’s identity indicates by itself that the person is evading responsibility, “which is immoral, and therefore, sinful.”Also, netizens spreading fake news cannot defend their actions by invoking the fact that other people, like family members or friends, are doing the same.

“Wrong is wrong even if everyone is doing it,” Babor points out. “Consensus or collective tolerance in the family or society doesn’t make spreading fake news right.”

With Holy Week nigh, a number of diocesan priests used the homily to warn about the evils of fake news.

Fr. Reginald Malicdem of the Manila Cathedral likened fake news spreaders and believers to the Jews who refused to believe in Jesus Christ’s divine mission on earth despite the testimonies of Moses and John the Baptist and Jesus’ own works.

“Hardheadedness is a sign of arrogance. The failure to accept the truth is a sign of pride [and] a failure in humility,” Malicdem said. “Kapag hindi natin kayang tanggapin ang katotohanan, iyan ay kayabangan.” In a sermon on March 24, Fr. Dave Concepcion of St. Maria Goretti Parish in Paco, Manila, said Jesus himself became a victim of fake news when those jealous of him accused him of working for Beelzebub after he exorcised an evil spirit from a mute man.

Concepcion said fighting for what one knew was wrong was merely being arrogant, and issued the reminder that “nobody gets choked by swallowing one’s pride.”

“If we restrict ourselves only to the things we want to believe, we prevent ourselves from what we ought to be … ” he told the congregation, adding in Filipino:

“How unfortunate that you would lose grace just because you refuse to let go of the falsehoods you are upholding.”

Taking off from the same Gospel reading, Fr. Daniel Voltaire Hui, parochial vicar of Quiapo Church, cautioned the faithful against being complacent to fake news.

“It may be that we are no longer conscious of drifting toward the direction of evil, because it has become part of our daily lives,” Hui said in Filipino. “Isn’t this what the spreaders of fake news are doing? They subvert the truth and deceive the people into believing lies.”

Malicdem, in his homily, said choosing humility and wanting to change when faced with the truth constituted the better option.