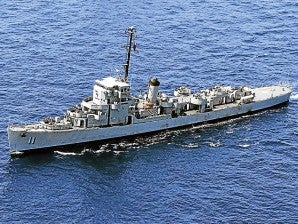 BIGGEST, OLDEST AND ONLY WARSHIP The Philippine Navy flagship BRP Humabon (PF 11) steams in formation during a naval exercise with US Navy warships in the West Philippine Sea (South China Sea) on March 14, 2010. The Humabon is a World War II vintage destroyer escort/frigate acquired from the US in 1978. It is now deployed along the Scarborough Shoal, an atoll facing Zambales and which China claims. US NAVY

SAN FERNANDO CITY—The Philippines is flexing what little naval muscle it has amid rising tensions in the West Philippine Sea, also called the South China Sea.

In Manila, President Benigno Aquino III on Friday insisted the Philippines won’t be bullied by China in their territorial spat and that Beijing should stop intruding into waters claimed by Manila.

Mr. Aquino said in an interview with The Associated Press that a government-backed mission to scout Manila-claimed waters for oil and gas had turned up “very good” prospects, though he declined to elaborate.

He said the Philippines reserved the right to explore its waters despite China’s rival claims.

“We will not be pushed around because we are a tiny state compared with theirs,” Mr. Aquino said.

“We think we have very solid grounds to say ‘do not intrude into our territory’ and that is not a source of dispute or should not be a source of dispute,” the President said. “We will continue with dialogues, but I think, for our internal affairs, we don’t have to ask anybody else’s permission.”

Mr. Aquino also said:   “We are not going to escalate the tensions there but we do have to protect our rights.”

Pursuing diplomacy, Foreign Secretary Albert Del Rosario met with diplomats from the Association of Southeast Asian Nations (Asean) and stressed the need for a united position “in addressing challenges.”

“Our objectives are to establish naval presence in the area and to test the readiness of our vessel in terms of territorial defense operation,” Cmdr. Celestino Abalayan, captain of the Humabon, told the Philippine Daily Inquirer.

“(We are) conducting defensive naval patrol to safeguard the territorial waters of the country.”

Abalayan said the patrol around Scarborough Shoal would last two to three days. A similar patrol was carried out two weeks ago.

The deployment of the Humabon followed a decision by China to dispatch its largest maritime patrol ship, the Haixun-31, to Singapore on Wednesday in a voyage during which it will pass through the West Philippine Sea.

The Humabon is the country’s largest and oldest warship. The 93.27-meter ship was built during World War II and has been described as “the last World War II-era destroyer escort/frigate in active service.”

Both China and the Philippines have claimed Scarborough Shoal as their own. In 1995, they signed a code of conduct pledging to solve their dispute by peaceful means.

Scarborough is an atoll or a triangle-shaped chain of reefs and islands surrounding a lagoon. It lies about 220 km from Zambales, 350 km from Manila and more than 800 km southeast of Hong Kong.

Scarborough, with an area of 150 square km, is more than 320 km from Puerto Princesa City in Palawan province. It is not part of the Spratly Islands where China, the Philippines and four other Asian nations are embroiled in a separate territorial quarrel.

The defense department said the deployment of the Humabon to Scarborough was not a response to the voyage of Haixun-31.

“No, I don’t think these are connected. The Navy conducts regular offshore patrols and we should not connect the deployment of Rajah Humabon to the deployment of this Chinese maritime vessel,” Defense Undersecretary Eduardo Batac said.

“It’s not really an action on what’s happening in the Spratlys. It’s really the pursuit of missions which are regularly given to them, one of which is offshore patrol,” he added.

According to Batac, China could patrol its coastal waters the same way the Philippines could, so long as the Chinese would not intrude into the Philippines’ 320-km exclusive economic zone.

“(From) what we understand, it’s a civilian ship that is on its way to Singapore, so it’s something that happens ordinarily and there’s no cause for alarm,” deputy presidential spokesperson Abigail Valte told reporters.

In his meeting with the Asean ambassadors, Secretary Del Rosario said that turning the contested waters into a “Zone of Peace, Freedom, Friendship, and Cooperation” was a key in “advancing a peaceful settlement of disputes.”

Del Rosario urged the Philippines’ Asean partners to “take a common position and, as a family of nations, together seek common approaches in addressing challenges,” a Department of Foreign Affairs statement said.

It said Del Rosario called the meeting to brief the ambassadors on his proposal for a “rules-based regime,” under which disputed territories can be designated as a joint cooperation area among claimants.

Commander Abalayan said the biggest threat to the Humabon crew was the rough sea and the erratic weather in the Scarborough Shoal area.

Abalayan, whose previous assignment included patrolling the seas off northern Palawan, said he was not expecting any confrontation with troops from countries with claims on isles and reefs in the so-called West Philippine Sea.

Zambales Governor Hermogenes Ebdane Jr. said the Navy routinely patrols the Scarborough Shoal because “it is within the borderline of (Philippine territory).”

Zambales officials have endorsed a resolution of the Masinloc town government claiming Scarborough Shoal, known locally as the “Bajo de Masinloc,” as part of Masinloc.

In Manila, the Philippine Coast Guard (PCG) said it was prepared to assist the Navy in patrolling the West Philippine Sea.

Commandant Adm. Ramon Liwag said a Coast Guard ship, the BRP Edsa, and a surveillance vessel owned by the Bureau of Fisheries and Aquatic Resources but manned by the PCG, were stationed in Puerto Princesa.

“We will assist [if called],” Liwag told reporters.

Bayan Muna Representative Teodoro Casiño said the House of Representatives’ foreign affairs committee could invite the Chinese ambassador to the Philippines and ask him about his country’s plans on the Spratlys.