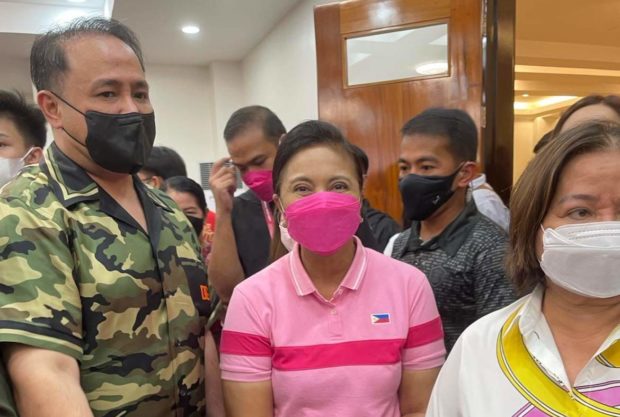 Most of the mayors, heads of barangay captains, Pampanga Rep. Aurelio Gonzales and former Rep. Anna York Bondoc welcomed Robredo and Pangilinan whose roots are traced back to Sto. Tomas town.

The pair arrived at 2 p.m. and were treated to native food at the provincial capitol.

In a subsequent ambush interview, Robredo told reporters that they were welcomed by the Pinedas even though they are not the candidates they support.

The Leni-Kiko campaign rally in Pampanga was off to a happy start at 5 p.m. with ArtiSta Rita singing “Mekeni Tuki Ka” and shower of confetti from a helicopter.

There is no official estimate yet of the crowds that have gathered at the grounds behind the Robinson’s Starmills.

Robredo and Pangilinan were accompanied by their senatorial slate.