In Baguio, kicking smoking habit is a community effort 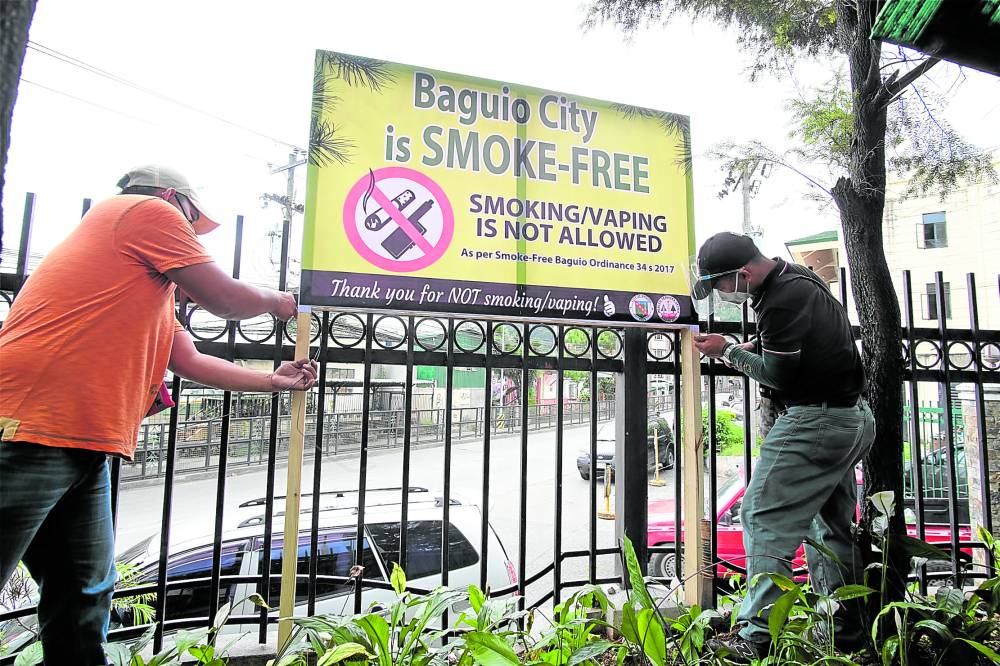 REMINDER Workers from the Baguio City government install a poster to remind residents and tourists about a local ordinance prohibiting smoking and vaping in the summer capital. —NEIL CLARK ONGCHANGCO

BAGUIO CITY — Every day at dawn for the past three years, Marilyn Signey gears up for an important mission: to ensure that Baguio City tourists and residents will comply with the city’s antismoking law.

As a member of the city government’s Public Order and Safety Division (POSD), Signey was tasked to patrol the public market and several barangays daily to check for violators and repeat offenders among individuals, public areas, stalls, “sari-sari” stores and other commercial establishments that sell cigarettes.

Baguio is a city of 380,000 people, but that number shoots up when tourists flock to the summer capital, especially during the peak season from December to May and during weekends.

“Before the pandemic, we usually apprehended seven to eight stores a day. But the number declined by around a fourth of that during the pandemic, maybe because even barangay ‘tanods’ were trained to enforce the [antismoking] ordinance,” she said.

Since 2017, the smoke-free Baguio initiative has been a self-sustaining program, with a total of P9 million in collected fines, all dedicated to tobacco control activities.

“Our task here in enforcing our ordinance is more difficult, considering the size and density of the city … [and our role as] an educational and trade hub,” said Daryl Longid, Baguio’s chief security officer.

Longid said that “any good policy becomes ineffective when there’s no effective enforcement agency” and without the support of the community.

He acknowledged this collective effort to change people’s attitude as instrumental to Baguio’s win at the 2021 Healthy Cities award of the World Health Organization and the Alliance of Healthy Cities, following Balanga City in Bataan province and Iloilo City.

“I can proudly claim that I think, in all the cities I’ve been to, Baguio is the most strict when it comes to the implementation, although we’re not the front-runners. There are others who started this because we have a national law already over the control of tobacco use. But the LGU (local government unit) has the power to enhance those national laws,” Longid said.

Signey, a 50-year-old single mother of three, said she’s doing her work “for the country and for young people who were exposed to cigarettes.”

But the task required more than strict enforcement. It also required a shift in mindset away from tobacco use—a crucial first step toward developing a culture of nonsmokers.

According to the Baguio City Youth Tobacco Survey in 2019, adults mostly begin to smoke at the age of adolescence.

The study surveyed the prevalence of tobacco use among adolescents, age 13 to 15, among public high school students in Baguio City, two years after the implementation of City Ordinance No. 34, series of 2017 (Smoke-Free Ordinance of Baguio).

The study found out that while Baguio City had a decreasing prevalence of tobacco use among adolescents, with 21.71 percent who admitted to have smoked cigarettes, some started smoking at 7 years old and younger.

Due to the ordinance, the report said the city’s youth had become less exposed to secondhand smoke in public places, had less access to cigarettes and were more knowledgeable about the harmful effect of tobacco.

To reduce the access of minors to tobacco products, the ordinance strongly prohibited the sale of cigarettes per stick.

But Signey said many violators continued selling cigarettes per stick for profit, while some found it hard to understand why this had been prohibited by the ordinance.

“We had to give them a long explanation why they couldn’t do that. We told them we were avoiding giving minors the capacity to buy or access cigarettes, because many children start smoking as early as 11 years old,” Signey said.

Signey and her colleagues at the POSD confiscate all opened packs of cigarettes in stores and issue violation tickets to vendors who sell cigarettes even without a permit to sell “CBL” (cigarette, beer and liquor).

Initially, the policy was met by resistance by several groups, including tobacco companies.

Longid’s office also had to counter false messages from groups that tried to influence community behavior toward the city’s antismoking law.

“There was a time when [tobacco companies] were distributing misinformation leaflets. The contents of those leaflets were based on a national law, [but] we have a stricter local law. The leaflets said that they could actually sell by stick. This was at the end of 2019 and just by the start of the pandemic,” he said.

Longid said they discovered this tactic when sellers showed them those leaflets, believing they were not doing anything wrong.

“We asked where it came from, and it’s from the trucks delivering the cigarettes. If I recall correctly, we’ve established that it was from the tobacco companies. And they also used the DTI (Department of Trade and Industry) logo to make it more credible,” he said.

After this strategy was discovered by the city government, Longid said tobacco companies had yet to make fresh attempts at interfering with the city’s antismoking effort.

“My office is the lead implementer of this ordinance and we regularly do inspections and no such materials had been chanced upon after that. Not even on [Facebook] or any social media platform,” he added.

Baguio demonstrates one of the many success stories of how local leaders have implemented grassroots initiatives to counter tobacco industry interference, although these efforts are “works in progress” and have no one-size-fits-all model, according to Health Justice’s 2015 report on antitobacco efforts of local governments.

“In a way, you are decreasing the tobacco epidemic and putting money to the government. But we are implementing it not just to collect money; it’s for behavioral change,” Panes said.