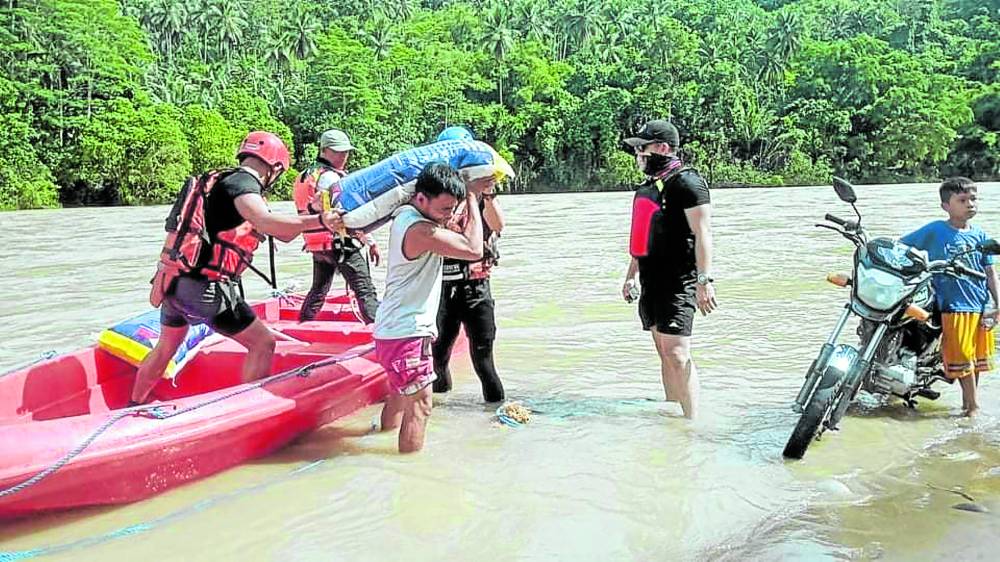 AID DELIVERY Rescue teams from the Davao Oriental provincial government use boats to reach flooded villages in Cateel and deliver food packs to communities isolated by the collapse of a bridge in the town. —PHOTO COURTESY OF MARK OLIVER ALVITE

In a report, the Davao City Disaster Risk Reduction Management Office (CDRRMO) said 2,064 families (6,931 people) evacuated at the height of the flooding in this city on Wednesday night.

According to the Davao City Social Welfare and Development Office, residents left their homes starting Wednesday night until early Thursday when water level in the city’s rivers, including Davao River, started rising.

Alfredo Baloran, head of the Davao CDRRMO, said seven barangays were affected by the floods, most of these near the banks of Davao River.

In Davao de Oro province, at least 5,000 people were evacuated on Wednesday even as the province continued to assess the extent of the damage brought by floods on agriculture and infrastructure, Gov. Jayvee Tyron Uy told the Inquirer by phone.

The provincial disaster risk reduction and management council in Davao de Oro on Wednesday passed a resolution recommending to the provincial board to place the province under a state of calamity, after two towns—Mawab and Monkayo—made separate declarations due to the heavy damage from the floods.

Uy said major bridges, including the link between New Bataan town and Camanlangan village, needed to be replaced, while rice lands had been submerged.

“This is the peak of the harvest season, that’s why, we know lots of farmers are affected because a big area devoted to palay has been underwater,” he said.