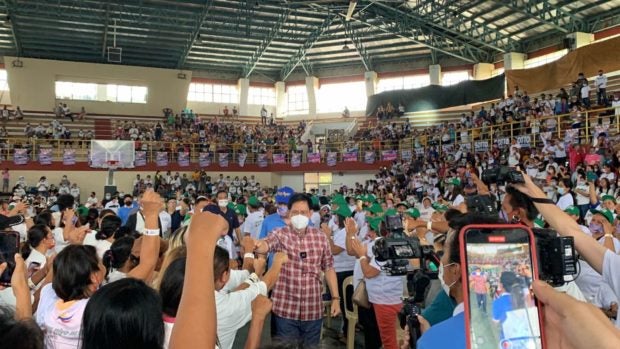 BOGO CITY, Cebu — Presidential candidate Senator Panfilo Lacson on Thursday returned to this city, eight years after he visited as the then rehabilitation czar when Supertyphoon Yolanda devastated parts of  Visayas in 2013.

“This is one of the 15 cities and municipalities na [that is] hardly hit by Yolanda. The last time I was here was in July 2014,” Lacson told reporters before his town hall meeting with residents here.

(The damage here was big, I think 18,000 houses were destroyed and when I was assigned to lead rehabilitation efforts after Yolanda, I went here. That was the last time I was here.)

At the time, Lacson turned over housing units and classrooms to the city donated by the private sector.

He said he returned to the city to “follow up” if the city has completely recovered from Yolanda’s impact.

(I was no longer part of the team that responded to Yolanda in early 2016 before after the rehabilitation and recovery plan was approved by PNoy, there’s already funding, I am no longer on the implementation side, I resigned so I want to find out also, I have to follow up what happened since then.)

He noted gathering the help of private corporations.

“Ito ang nakinabang noon [This is one of the cities that benefited from that],” Lacson said of the city. “Hindi ako pwedeng umasa nang umasa sa government kasi mabagal nga [You can’t solely depend on the government because it was slow].”

(All governments for that matter, I’m not zeroing in on PNoy’s government, but any government, historically because of the COA rules, we really needed to find ways, to be proactive and improvise.)

Asked what his plans are for cities like Bogo, Lacson said he seeks to dialogue with residents for updates on the city’s trade and commerce.

(Bogo is the northern trading center of Cebu…It’s good to dialogue with the people here to find out what is the latest in terms of trade and commerce here in Northern Cebu.)

Lacson and his vice presidential running mate, Senate President Vicente Sotto III, has been holding town hall meetings with multi-sectoral groups throughout their campaign so far.

(It’s better to talk to those who are not really given attention to by the government.)

Survivors pick up the pieces in Yolanda Village in Bogo City