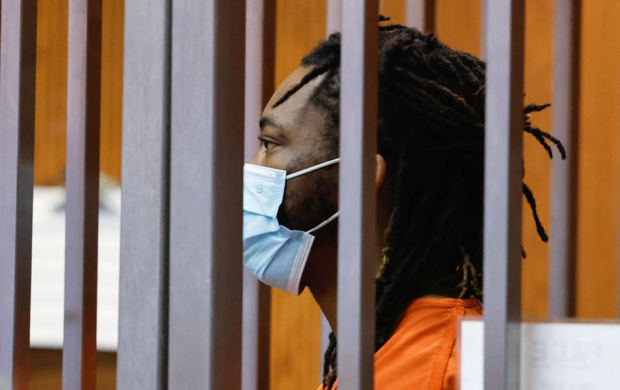 Dandre Martin, 26, who was taken into custody on Sunday as a “related suspect” in a shooting in Sacramento over the weekend that left six people dead, appears in state superior court in Sacramento, California, U.S. April 5, 2022. REUTERS

LOS ANGELES — Two brothers suspected of being involved in a mass shooting in California that left six dead were under arrest Tuesday.

Detectives probing the apparent gun battle in downtown Sacramento, which erupted as nightclubs were emptying early on Sunday, say both men are suspected of possessing firearms.

One of the men, Smiley Martin, was among 12 people treated in hospital after a shootout in which at least 100 rounds were fired, apparently after a brawl.

Martin, 27, whose injuries are described as “serious,” is suspected of being in possession of a “machine gun,” police said Tuesday, adding he was being guarded by an officer while his medical care continues.

He is the brother of Dandrae Martin, 26, who was arrested Monday on suspicion of weapons offenses.

A third man, Daviyonne Dawson, who was allegedly found to have a gun in the immediate aftermath of the shooting, has also been arrested.

Sacramento police say officers rushed to the scene of the shooting around 2:00 am Sunday after hearing gunshots and arrived to find a large crowd and multiple victims.

Video footage of the immediate aftermath showed first responders tending to bloodied victims. The bodies of the dead lay nearby.

Three of those who died were women. All six have now been identified.

The shooting happened just blocks from the state capitol and close to the venue where the NBA’s Sacramento Kings play.

Firearms are involved in approximately 40,000 deaths a year in the United States, according to the Gun Violence Archive website.

Father kills three children, self in US church shooting