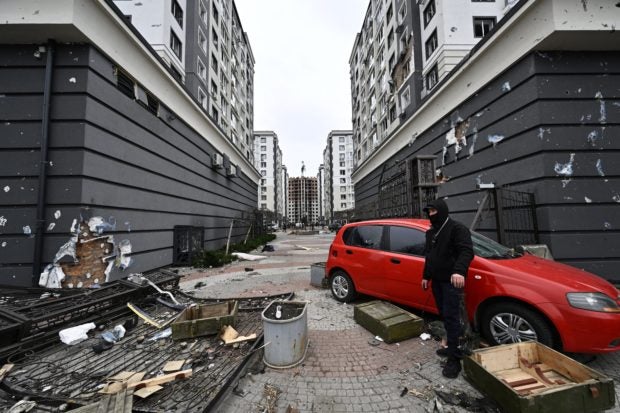 A man stands in a damaged residential area in Bucha on April 5, 2022, as Ukrainian officials say over 400 civilian bodies have been recovered from the wider Kyiv region, many of which were buried in mass graves. AFP

BUCHA — A couple of weeks into the Russian occupation of Bucha, local resident Olena sensed a turn for the worse when older, rougher soldiers appeared and began to spread fear in the town.

They were “brutal” compared to the younger soldiers who captured the town at the start of the invasion, said the 43-year-old mother of two.

“Right in front of my eyes, they fired on a man who was going to get food at the supermarket,” said Olena, who did not wish to give her second name.

Located 30 kilometers (19 miles) northwest of Kyiv’s city centre, the town of Bucha was occupied by Russian forces on February 27 in the opening days of the war and remained under their control for a month.

After the bombardments stopped, Ukrainian forces were able to retake the town on Thursday.

Large numbers of bodies of men in civilian clothing have since been found in the streets.

Throughout March, Olena lived with her children, 7 and 9 years old, in a cellar with no electricity under a four-storey housing block, along with other residents.

“There was no Ukrainian army in town, only the territorial defence made up mostly of unarmed guards from local businesses. And then they fled” when the Russians arrived, she said.

“At the beginning, there were mostly young (Russian) soldiers. Then, two weeks later, there were others, older ones. They were more than 40 years old.

“They were brutal. They mistreated everyone. And that’s when the massacres started,” she said, before pausing, a dark, thoughtful look on her face.

On Monday, Russia “categorically” rejected all accusations in relation to civilian killings.

According to Olena, the older soldiers “were very well equipped and wore black and dark green uniforms” as opposed to standard Russian army fatigues.

“There were some good guys among the Russian soldiers and there were some very rough men, especially officers from the FSB”, the Russian security services, said Olena, who was dressed in a red beanie, a fleece jacket, tracksuit bottoms and trainers.

“I was going up to the soldiers to ask them what I should feed my children with and they brought us rations and food.

“It was they who told us that it was the FSB that had banned us from moving around, that they were very violent special forces. It was Russians saying this about the Russians!” she said.

Only women were allowed to leave to fetch water or food. The men were not permitted to go out into the streets and had to stay where they were.

“Our neighbours went to put their rubbish out around 5:00 pm. They were two men and a woman. One of the men had served in the army. They didn’t come back.

“They were found by the women in our building when they went to get wood in the courtyard of a house. The corpses were lying in blood on the ground with bullet marks,” Olena said.

“When the FSB agents arrived, they asked, ‘why didn’t you leave?’ I told them I have lived here for 43 years and had a peaceful life, so where would I go? At that point, they started calling us traitors, because we didn’t leave.”

On Saturday, AFP saw the bodies of at least 22 people in civilian clothes on a single street. One of them was on the pavement near a bicycle, others had bags of provisions near them. The body of one man had his hands tied behind his back.

On Monday, the bodies of five men, their hands also tied, were found in the basement of a children’s sanatorium in Bucha, the Ukrainian prosecutor general’s office said.

According to the mayor of Bucha, 280 people were buried in mass graves dug by Ukrainians, as the number of dead mounted.

In the centre of the town on Monday, one road was littered with the battered husks of around 20 vehicles, including troop transporters, tank trucks and Russian light armoured vehicles, some of them already beginning to rust.

The column was likely targeted by Ukrainian bombardments shortly after it rolled into town at the end of February.

In gardens, patches where the earth had been churned up could be seen surrounded by shell casings, an indication the site was used as an artillery position to pound the Kyiv region.

Kremlin spokesman Dmitry Peskov said on Monday that Russian “experts at the ministry of defence have identified signs of video fakes and various fakes” in the videos shared by Ukrainian authorities.

US pushes to suspend Russia from UN human rights body