Tied in knots? Polygamy persists in DR Congo despite ban 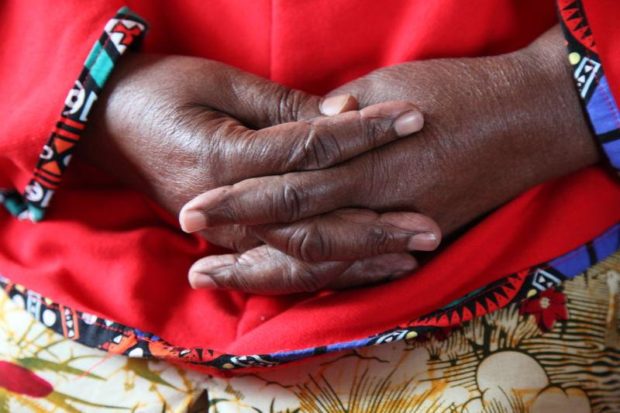 Kenyan housewife Wanjiru, 80, during an interview about her polygamous marriage at the women’s charity Daughters of Mumbi Resource Center in Kiambu county in Kenya on July 3, 2018. Nita Bhalla/Thomson Reuters Foundation

BUKAVU, DR Congo – “I can get married again — the dream is to get to seven wives,” said Congolese church pastor Chirhuza Zagabe, a husband to four spouses and father of 16 children.

In 2012, the 60-year-old married three women simultaneously in his church in eastern Democratic Republic of Congo. He repudiated one for “bad behavior”, but now has four aged between 26 and 48 through other marriages.

Zagabe’s situation shows that polygamy persists in the vast central African country, where advocates strongly back the practice of being married to more than one person despite it having been officially outlawed for more than three decades.

Around two percent of the world’s population live in polygamous households, according to the American think tank, Pew Research Center.

The practice is most widespread in sub-Saharan Africa, where an estimated 11 percent of the population live in polygamous households.

The proportion in DR Congo is two percent. Examples abound of Congolese men boasting about having a “second office” that everyone is aware of — even their first spouse.

When a video purporting to show a man marrying three women at the same time was posted on YouTube last month, the video went viral on social media.

It told the story of a young Congolese man who supposedly fell in love with a woman who had two look-alikes that were so convincing he ended up marrying all three.

It was false — but viewers apparently believed the story.

Some comments pitied the alleged groom. “He’s going to suffer”, wrote one reviewer. “We will have seen it all,” said another, while an admirer remarked: “The lad is strong.”

A cinema director from the eastern city of Goma revealed he was behind the film, which he says was based on a true story and used actors to raise the issue of polygamy.

Every Sunday, Zagabe explains and praises the merits of polygamy in the Lord’s Primitive Church, which was established in 1983 and is one of DR Congo’s many religious sects.

A few dozen of his flock eagerly listen to his preaching in Bukavu, the capital of South Kivu province, with women on one side of the central aisle and men on the other.

Zagabe’s sermon claims humanity’s story started with one male and several females. “Instead of living in adultery and debauchery, God authorised man to have several wives,” he told AFP.

Three of the pastor’s wives live with him in Bukavu and the fourth in Bujumbura in neighbouring Burundi.

“Polygamy is a human institution that goes far back in our traditional African and Congolese culture. It’s not a divine institution,” said Raymond Kongolo, a Catholic priest in Bukavu.

DR Congo’s constitution and family code have clearly stated since 1987 that polygamy is an offence, according to Joseph Yav, a lawyer and law professor in the southern city of Lubumbashi.

“Marriage in DR Congo is monogamous,” he stressed. But polygamy “is present and practised in Congolese traditions, notwithstanding the formal legal ban”.

Among Zagabe’s congregation was Kalungu Kalebe, who has two wives and eight children. Rather than transgressing the law, the 40-year-old believes he is “blessed by God”.

“I must follow David, Abraham and Solomon, who married several wives,” he said, referring to Biblical prophets.

Fellow parishioner Nathanaelle, 15, said she was “ready” to wed a man with other wives. “That doesn’t bother me at all,” she added.

Rakel, one of Zagabe’s wives, sees the children of his other spouses as her own, in addition to the three offspring she has borne him.

Another of Zagabe’s wives, Yaelle, said she lives in harmony with his other spouses. But she noticed that neighbours who used to visit her when she was the only wife in the household have since stopped coming. “They fled from us,” Yaelle said.

“This polygamy business is a deviation in our society, it’s unthinkable!” said Nicolas Lubala, a 42-year-old Catholic who accuses the Kinshasa-headquartered Primitive Church of “contributing to moral depravation”.

Mathilde, 23, was clear that marrying a bigamous man was “impossible”. “In polygamy, there are too many problems, discord between the wives, the children,” she said.

But “if the man has money and other wives, getting attached to him isn’t troubling”.

Daughter says she was abused by polygamous sect leader