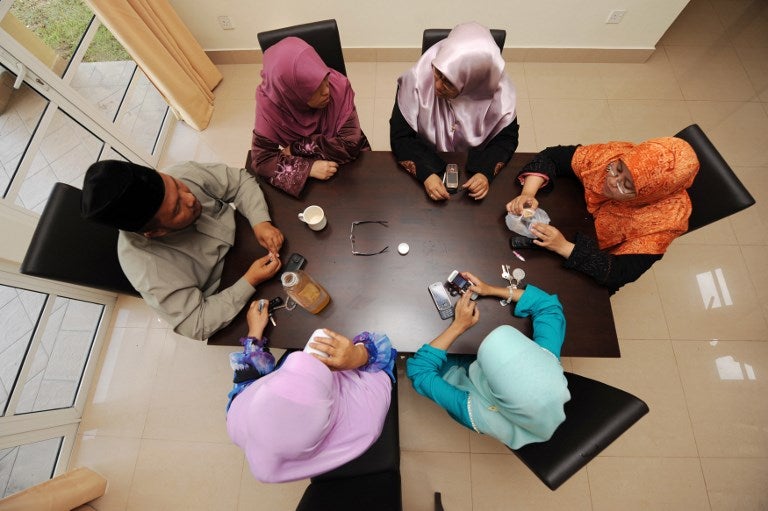 This file photo taken on January 26, 2010, shows Mohamad Ikram Ashaari (left), 41, talking around a table with his four wives and a child at their home in Putrajaya outside Kuala Lumpur. Men in polygamous relationships find it difficult to meet the needs of all their wives and children, and the result is unhappy and cash-strapped families, according to a landmark Malaysian study by advocacy group Sisters in Islam (SIS). SIS estimates that up to five percent of marriages in Malaysia are polygamous, a figure that has risen as rules limiting multiple marriages have been watered down over the years. AFP FILE

“Polygamy is often an injustice to women and children,” said the influential cleric, in quotes published on Twitter late Friday by Al-Azhar, Sunni Islam’s most prestigious seat of learning.

The practice is the result of “a lack of understanding of the Koran and the tradition of the Prophet,” he added.

Tayeb also addressed the issue in a weekly Friday television show, telling viewers: “Those who say that marriage must be polygamous are all wrong”.

After the grand imam’s comments sparked fervent debate on social media, Al-Azhar on Saturday clarified that he did not call for polygamy to be banned.

In his Friday comments, Tayeb called more broadly for the way women’s issues are addressed to be revamped.

“Women represent half of society, if we don’t care for them it’s like we are walking on one foot only,” he said in the remarks published on Twitter.

The grand imam’s approach was welcomed by Egypt’s National Council for Women.

ADVERTISEMENT
Read Next
Trump warns conservatives against ‘socialist nightmare’
EDITORS' PICK
World-standard accounting: Unlocking your financial potential
Water remains our saving grace right now
Defend Your Health! Shop health essentials from home with Rose Pharmacy’s Online Sale
COVID-19 wards in 2 more hospitals reach full capacity
Navotas will be on lockdown from July 16 to 29 – Tiangco
Chatting with companions, answering calls on MRT 3 trains banned
MOST READ
‘I am not my father,’ says daughter of lawmaker who voted to deny ABS-CBN franchise
In slap on face of PH, China replies to Locsin on tribunal ruling: It’s invalid
Vilma Santos-Recto ‘prepared’ to face ‘consequences’ over ABS-CBN franchise vote
Did a meme get on Agot Isidro’s nerves? She’s asking ’24 Oras’ to fact-check it
Don't miss out on the latest news and information.