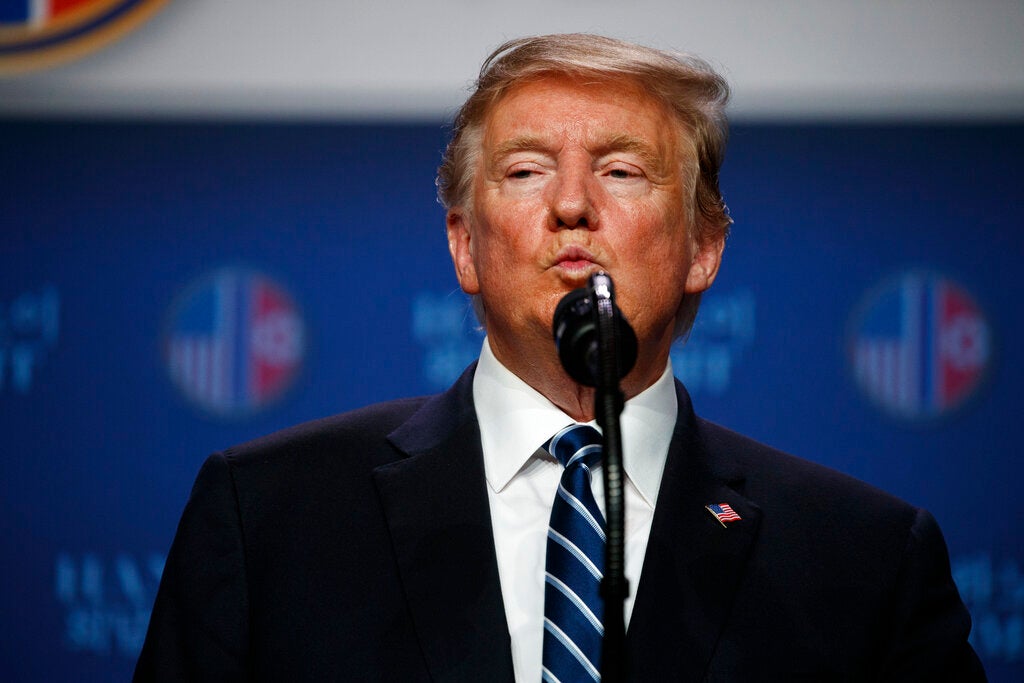 NATIONAL HARBOR, United States – President Donald Trump rallied right-wing activists Saturday with a speech offering conservative red meat on immigration, trade and the threat of “socialism” as he sought to move on from a bruising week in domestic and international politics.

“We believe in the American dream, not in the socialist nightmare,” he said to boisterous applause from hundreds of supporters at the annual Conservative Political Action Conference (CPAC) near Washington.

“America will never be a socialist country,” Trump added in a mammoth two-hour speech that seemed to draw energy from the fervent reception offered by some of his influential supporters in the room.

It was his first public appearance since coming home empty-handed, and to brickbats from all sides, from a nuclear-disarmament summit with North Korea’s reclusive leader Kim Jong Un.

The White House is also smarting from explosive testimony on Capitol Hill by Trump’s former lawyer and fixer on Wednesday that branded him a criminal and a racist.

Trump, often speaking in mocking tones, portrayed the Democratic Green New Deal climate strategy touted by the left of the party as a socialist plan that will devastate the fossil fuel and motor industries.

Seeming to feed off the crowd’s support, he added: “We’re in the swamp of Washington DC, but you know what — we’re winning and they’re not.”

‘These people are sick’

With the federal investigation into possible collusion between the Trump campaign and Russia reportedly approaching its conclusion, Trump again berated Special Counsel Robert Mueller’s team as partisan hacks out to get him, adding that “these people are sick.”

His voice dripping with sarcasm, he suggested that his call in summer of 2016 for Russia to find and release Hillary Clinton’s emails was a joke that had been obtusely taken at face value by the media.

On the foreign front, Trump repeated his claim that the last Islamic State fighters in Syria would be captured or killed imminently — “as of tomorrow,” he said — and railed against Chinese tariffs on American goods.

The speech, at the National Harbor in Maryland, was Trump’s third to CPAC since he was elected.

The word “socialism” has been in heavy rotation since some Democratic candidates began openly embracing liberal platforms including the Green New Deal and a Medicare for All.

On Friday, Vice President Mike Pence spoke at the four-day conference to warn the faithful that Democrats are taking a “hard left turn” ahead of 2020.

“Under the guise of Medicare for All and a Green New Deal, Democrats are embracing the same tired economic theories that have impoverished nations and stifled the liberties of millions over the last century. That system is socialism,” he said.

Trump’s speech came as Senator Bernie Sanders, who has embraced the label of “democratic socialist,” spoke at a rally in New York, assailing Trump as “the most dangerous president in modern American history.”

It was Sanders’ first major speech since announcing he will again seek the Democratic presidential nomination in 2020.

Republicans hoped Trump’s address would serve as a diversion to the Mueller investigation and to the testimony this week on Capitol Hill by the president’s former personal attorney Michael Cohen implicating him in crimes.

In December a court sentenced Cohen, who worked for Trump for over a decade as his lawyer and vice president in the Trump Organization, to three years in prison for hush-money payments to two women and for lies to Congress — both of which he said were to protect Trump — and tax evasion.

In dramatic congressional testimony Wednesday broadcast across the world on cable and US network channels, Cohen turned on his former boss, using the big stage to describe Trump as a “mobster,” “con man,” “cheat” and a “racist.”

Meanwhile in Vietnam, a high-stakes second summit between Trump and Kim broke up in disarray Thursday, without even a joint statement, after the pair failed to reach an agreement on walking back Pyongyang’s nuclear program in exchange for sanctions relief.

Both sides said they were open to further talks, though a third summit has not been scheduled. /cbb