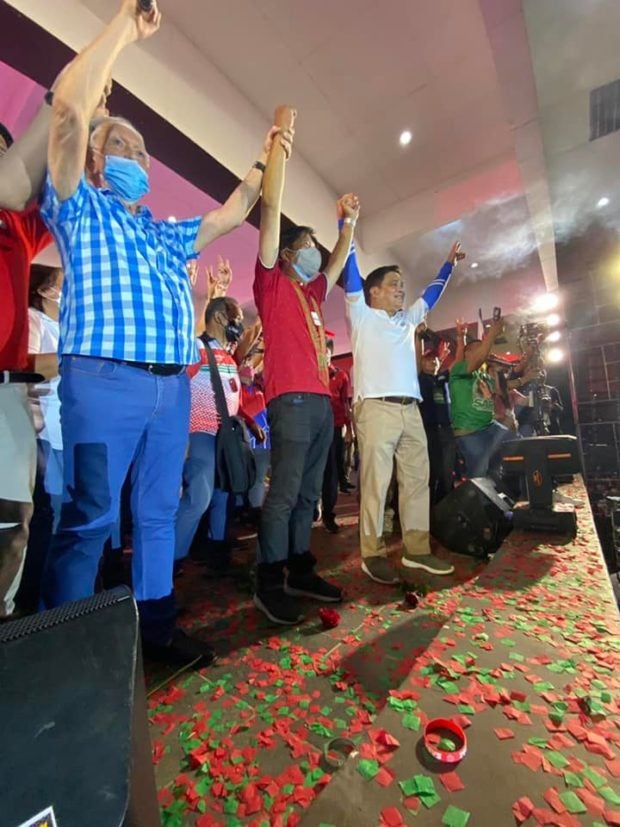 (They know the consequences. If they don’t want to carry us, it would be awkward for us to do so with them, right? So it’s a personal choice. No hard feelings.)

“Maliwanag naman ‘yon when we talked to him na pwede sila ma-endorse ng iba, ma-adopt ng iba, but once they parang endorse another team, another tandem, then so be it and that’s it,” Lacson added.

(It was clear when we talked to him that they can be endorsed by others, they can be adopted, but once they seem to endorse another team, another tandem, then so be it and that’s it.)

Zubiri was seen raising the hand of another presidential candidate, former Senator Ferdinand “Bongbong” Marcos Jr., during the latter’s rally in Bukidnon.

Asked if the tandem will no longer endorse Zubiri, Lacson responded with: “Hindi na, hindi na [Not anymore, not anymore].”

(We are sure of these people…Because they expressed that even if they are adopted by others, they are still there for us.)

INQUIRER.net has reached out to Zubiri for his comment but has yet to receive a response as of writing.

Zubiri is the third senatorial candidate to be dropped from the Lacson-Sotto tandem’s slate. The first ones were Senator Sherwin Gatchalian and former Quezon City Mayor Herbert Bautista, who both expressed support for Marcos and his running mate, Davao City Mayor Sara Duterte-Carpio.

Meanwhile, Sotto said his tandem with Lacson remains “solid.” This, amid several suggestions that the vice presidential bet team up with other presidential candidates.

(We remain solid. If there is an endorsement from another group that wants us to pair up with another candidate…It depends on the person. It’s up to them, we can’t expect everyone to believe in what we are saying or what they are saying.)

For his part, Lacson welcomed the support that Sotto is getting, saying he is “happy” for his running mate.

“May mga [There are] endorsements here and there and I’m happy for the Senate President na nakakakuha siya ng mga endorsement sa [has been getting endorsements] left and right,” Lacson said.

“That’s good because ang victory niya, victory ko rin e. Whether I make it or not, if he makes it then I’ll be very happy for him, ‘di ba? ‘Yon ang tandem; hindi ‘yung iba na laglagan nang laglagan. Kami, alalayan [That’s what a tande is; not like others who throw each other under the bus. Us, we guide each other],” he added.