Arroyo asks Pampanga voters to give landslide win to Duterte-Carpio 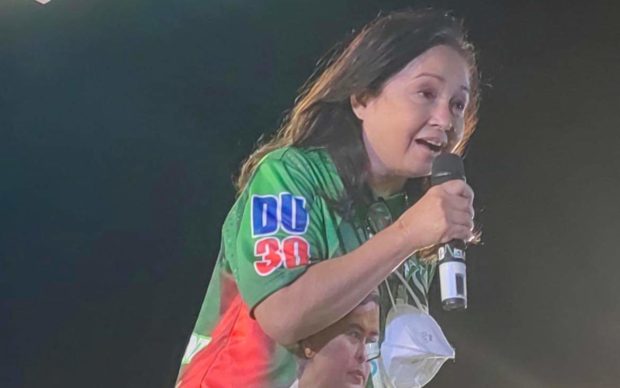 “For Bong Bong Marcos to be a good president, he needs a vice president like Sara. So let’s make her win by a landslide in Pampanga,” Arroyo told the crowd that gathered at big private resort in Mexico town, speaking straight in the native language.

The appeal was similar when they backed the former president’s running mate in the 2004 elections, Noli de Castro.

Both Macapagal-Arroyo and De Castro won in that said elections.

Arroyo said she was speaking from experience.

In her case, she said she was “lucky” to have broadcaster Noli de Castro as vice president.

“It is difficult to serve as President but I got big help from Noli,” she said.

Arroyo who is unopposed in her comeback to Congress, said voting for Duterte-Carpio was like reciprocating her father’s “big support” to the development of Pampanga.

Duterte-Carpio said she received a lot of help when Arroyo served as head of the Lakas-CMD. She wished Arroyo good health, happiness and long life.

Aside from this, Macapagal-Arroyo said President Rodrigo Duterte, Duterte-Carpio’s father, helped the province of Pampanga.

Macapagal-Arroyo is the president emeritus of Lakas-CMD, the party which Duterte-Carpio runs under for her vice presidential bid.

Gloria Macapagal-Arroyo, through her own lens