Lakas-CMD: Idea of Inday Sara running for VP 'did not originate' from ex-president Arroyo | Inquirer News 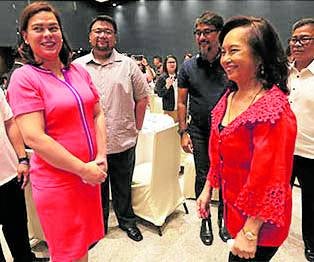 FILE PHOTO: This July 30, 2018 photo shows Davao City Mayor Sara Duterte-Carpio (left) and former president and Speaker Gloria Macapagal-Arroyo (right) with some members of the House of Representatives in a hotel.  Ver Noveno

“The idea of her running as Vice President did not originate from Former President Gloria Macapagal Arroyo. There was no meeting, planned or canceled, between former President Arroyo and Mayor Duterte in Balesin,” the Lakas-CMD said in a statement.

“There was no summons for former Senator Bongbong Marcos to go to Balesin,” it added.

Duterte-Carpio over the weekend filed her certificate of candidacy (COC) for vice president following the withdrawal of her reelection bid as Davao City mayor.

She would be running for vice president under the Lakas-CMD, where Macapagal-Arroyo serves as president emeritus.

Last week, before the daughter of President Rodrigo Duterte decided to join Lakas-CMD and the vice presidential race, social media went abuzz over a supposed meeting set by Macapagal-Arroyo with Duterte-Caprio in Balesin.

Macapagal-Arroyo’s staff, however, has since denied it.

Duterte-Carpio and Macapagal-Arroyo are no strangers to each other. In 2018, it was said that Duterte-Carpio played a hand in the ouster of then-Speaker of the House of Representatives Pantaleon Alvarez, and the installment of then-Pampanga 2nd District Rep. Macapagal-Arroyo as the Davao del Norte congressman’s replacement as top leader of the lower legislative chamber.

“As earlier stated by party President Romualdez, LAKAS-CMD is elated with Sara joining Lakas because of her ‘sterling qualities as a leader and we saw up close her exemplary work ethic as chief executive of Davao City’,” Lakas-CMD said.