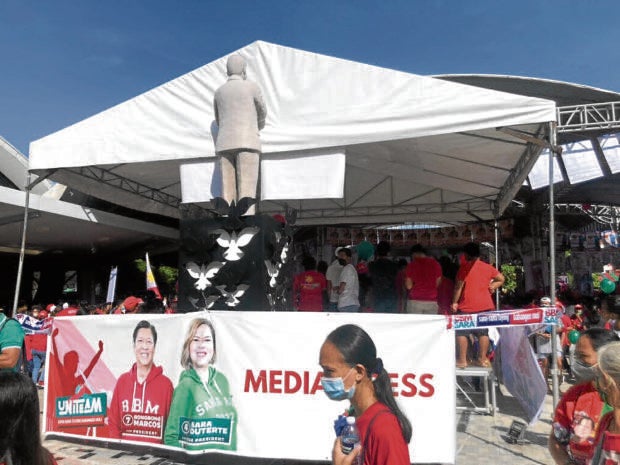 The monument of the late senator Ninoy Aquino at the Tarlac City Plaza has been partly covered by a tent as the Marcos-Duterte tandem holds their rally on Saturday morning.
PHOTO BY NESTOR A. CORRALES

CITY OF SAN FERNANDO, Pampanga — After getting flak for blocking the monument of the late Senator Benigno “Ninoy” Aquino Jr. during the rally of presidential candidate Ferdinand “Bongbong” Marcos Jr., the City Government of Tarlac on Monday issued a non-apology, with a denial that it meant to cause any disrespect to the memory of the so-called Son of Tarlac.

In a statement on Facebook, city administrator Lumer Lobo said it meant no disrespect when Aquino’s image was partially hidden in a plaza where Marcos’ Uniteam held its rally, and that the incident was just “inadvertent” and “nothing personal.”

“The City Government of Tarlac vehemently denies any intention to disrespect the memory of the late Benigno S. Aquino Jr.,” Lobo stated.

Tarlac used to be the bailiwick of the Aquinos, being home to the Hacienda Luisita estate of the late President Corazon Aquino, widow of Ninoy who was killed in 1983 that heralded the start of the end of the the more than 20-year Marcos regime.

Aquino was a key opposition figure during the presidency of Bongbong Marcos’ father and namesake, the late dictator Ferdinand Marcos Sr.

A monument to remember Aquino is erected at the Tarlac City Plazuela. However, the monument was partially covered by a tent during the rally.

The Aquino monument faces the very stage where Marcos Jr. appealed to Tarlacqueños to elect him to Malacañang. But the monument was partially covered and blocked by a tent.

We asked Mayor Cristy Angeles about this. She says: It’s time for forgiveness."https://t.co/FL6bHEJc1q

In its Facebook post, the city government attached a photo showing that the tent did not cover the monument. A smaller tent, however, was later erected that extended “towards the monument.”

Official Statement of Atty. Numer Lobo in relation to the publicized photo depicting a blockage of a tent infront of the…

“The supposed tent, as can be gleaned from the attached photo, was originally located at a considerable distance, spacious enough to separate the tent from the monument,” Lobo said.

“However, due may be to the influx of people attending the mentioned rally, owing to the fact that the heat of the sun dictates the need for a shelter, the same tent was inadvertently moved towards the monument, which was unintentional,” he added.

Further, Lobo said: “The incident was inadvertent, nothing intentional.”

Lobo dubbed the incident as “unfortunate,” saying that despite the platforms discussed during the rally, “others just chose to spread divisiveness and highlighted this unintended and unintentional incident.”