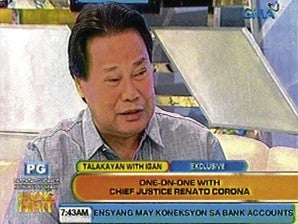 MEDIA BLITZ Besieged Chief Justice Renato Corona comes out firing against his critics in exclusive interviews separately on “Unang Hirit,” “Super Balita sa Umaga,” and “News to Go” all on GMA TV and radio on Wednesday. PHOTO COURTESY OF GMA 7

Impeached Chief Justice Renato Corona on Wednesday came out firing at his critics, claiming the accusations leveled against him and his family by his wife’s cousin, Ana Basa, were “big lies.”

In his first media interview since his impeachment trial in the Senate began on January 16, Corona said the lies were part of a “professional hatchet job” being carried out by the law firm of Senior Associate Justice Antonio Carpio.

The prosecution said it might consider presenting Ana Basa and her aunt, Sister Flory (one of the five original BGEI stockholders), if necessary, in its rebuttal to the defense of Corona when the Senate impeachment court resumes trial on March 12.

Iloilo Representative Niel Tupas Jr. said the two-part Q & A interview with Ana Basa   which detailed how Corona and his wife oppressed other members of the Basa clan, “strikes at the very character of Chief Justice Corona.” (The interview appeared in the Philippine Daily Inquirer on March 6 and March 7.)

Corona said he was just dragged into the ownership dispute over Basa-Guidote Enterprises Inc. (BGEI), a company owned by the family of his wife Cristina, since he was an in-law and his wife’s former lawyer.

Tupas said the interview presented the dark side of the Chief Justice that the public did not know—his lack of integrity—as alleged in the impeachment complaint.

“It clearly shows Corona’s lack of integrity. It will also shed light on the Basa-Guidote issue. The prosecution will discuss if we will include Ana’s testimony as well as Sister Flory’s in rebuttal if necessary,” Tupas said.

In the two-part Q & A, Ana Basa said Cristina seized control of the rental income from a company property in Manila and of the P34-million proceeds from the sale of the property to the city government although she was only entitled to a 10-percent share of BGEI.

Ana also claimed that the Corona couple sent armed men to harass her parents at home and make phone calls in the middle of the night after her father, Jose Ma. Basa III, filed a criminal case against Cristina for allegedly misappropriating rentals due BGEI.

Corona allegedly  put a gun to the head of the family caretaker and threatened to kill the latter, she said. Ana, who is in casino business in Las Vegas, Nevada, is in the country to visit her aunt Flory, who just turned 90.

The Chief Justice also insisted that the impeachment complaint filed against him by the President’s allies in the House of Representatives was linked to the high court’s decision to dismantle the 4,915-hectare hacienda.

He disclosed that the Cojuangco-owned HLI wanted a P10-billion compensation from the government before the agricultural estate could be distributed to the 6,296 registered farmworker-beneficiaries.

“I was the one who blocked that and for them to get that amount, they would have to … remove me. That’s the truth. That’s the root cause of this impeachment,” he said.

“If you will ask me now why they want me out, I think it’s because I blocked that demand for a P10-billion compensation for Hacienda Luisita.”

“I owe it to the people to explain that this is a big lie,” Corona said in an interview with Arnold Clavio, host of the GMA 7 morning show “Unang Hirit.”

“I’m not directly involved in this problem. This feud among the members of my wife’s family started a long time ago. It’s about 30 years in the running,” he said in a mix of English and Filipino.

“That Ana Basa and (her parents) were not stockholders of the corporation. But they are still insisting that they [still] are (even if) they already got their share,” the Chief Justice said.

Corona vehemently denied that he put a gun to the head of a BGEI watchman and threatened to kill him, saying he was not known to be a hot-headed person. [The caretaker, Pedro Aguilon, had issued an affidavit about the gun-poking incident that took place on Jan. 2, 1997.]

“That incident did not happen. Those who know me personally for years would tell you that I’m not that kind of person,” Corona said in a separate radio interview with dzBB anchor Mike Enriquez.

After keeping mum on the issues raised against him by the prosecution panel in his impeachment trial, Corona said he decided to speak with the media after meeting with his defense lawyers on Tuesday.

A member of the Corona camp said the Chief Justice’s visit to GMA 7 on Wednesday was a start of his “media hopping” to “friendly” media companies.

“You cannot blame the Chief Justice because he had been wanting to speak up since Day One. He’s just trying to defend himself and his family,” the source, who asked not to be named, told the Inquirer.

Reiterating his claim of innocence, Corona said he was ready to explain his wealth and counter the allegations that he had amassed ill-gotten wealth.

“I will give an adequate explanation for each centavo that came in and went out,” he said.

Corona also took exception to what he described as “black propaganda” intended to portray him as a crooked public official who used his position to enrich himself and his family.

The Chief Justice insisted that he was able to acquire some of his properties from the money he earned as “a top executive in the private sector.”

“Those who are out to destroy me had been spreading those stories. But that’s one thing that I wanted to explain since the beginning,” he said.

“They are trying to picture me as if I had nothing when I entered government. That’s not true because I was a top executive in the private sector for half of my entire career. So, I was able to save. And just like my wife, I also didn’t come from an ordinary family.”

While maintaining a fighting stance, Corona acknowledged that he and his family were hurt by the allegations hurled against them.

“We’re just humans. We’ve been receiving all kinds of insults. There were also name-calling. We’re all hurt by these attacks. Who wouldn’t be? These are all baseless and lies,” he said.

Corona said the attacks were part of a  demolition job. “It’s very obvious that a professional group has been doing this to us.”

When Clavio asked him about his relationship with Carpio, Corona said it was “OK” and that he would occasionally speak with him during the deliberations of the Supreme Court en banc.

But when the host asked him if he thought Carpio could be responsible for the purported demolition job against him, Corona smiled and said: “What do you want to hear? We cannot ignore that because he had also been aspiring to be a Chief Justice.”

“What I know is that his partners in his law office are the ones making the moves.”

Asked if Carpio’s law partners were behind the attacks against him, Corona said: “Siguro (Maybe).”