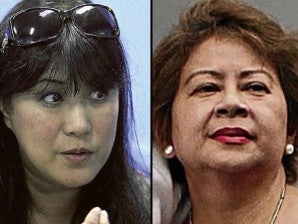 The last time Sister Flory Basa saw her niece, Cristina Corona, the wife of Chief Justice Renato Corona, was while the latter was in the process of filing a libel suit against the now 90-year-old nun and three other relatives.

That was in 1995. The libel suit was Cristina’s counter to an estafa complaint filed by her older kin who also caused the publication of a notice to that effect.

Today, Sister Flory said she continues to pray “for her (Cristina’s) enlightenment because I heard she has not been doing the right things anymore.”

Sister Flory confirmed the statements that Ana gave in the two-part series that appeared in the Philippine Daily Inquirer.

The member of the Franciscan Missionaries of Mary was interviewed by phone on Wednesday by Radyo Inquirer from St. Joseph Convent in Cavite province, where she is based.

“We are just a little family praying together. We don’t want to get involved in the impeachment, but Cristina is a member of our family,” she added.

Sister Flory is one of the original stockholders of the Basa-Guidote Enterprise Inc. (BGEI), a family-owned corporation that manages several properties located in Legarda, Manila.

Other stockholders include the nun’s sister, Asuncion Basa-Roco, the mother of Cristina, and a brother, Jose Maria Basa III, the father of Ana Basa.

In an interview, Ana Basa said the family only learned about the financial status of the BGEI in the course of the ongoing impeachment trial of the chief justice.

In explaining his statement of assets, liabilities and net worth (SALN), Corona had explained that the P11-million liability he reported in his SALN was a loan from the BGEI.

He also said the P32.6 million he withdrew from the Philippine Savings Bank on Dec. 12, 2011, the day he was impeached, actually belonged to BGEI.

The US-based Ana is in Manila to visit her aunt.

“What happened here is that we were really shocked when Cristina said that she owns the whole company. That was our inheritance, and it has not been subdivided. We were surprised to learn that the buildings had been demolished,” she said.

“I do not know why Cristina is making such claims—that she owns the company. Maybe, she was asked by her mother (Asuncion) to look after the property, because at that time, Atty. Vicente Roco (Cristina’s father) was sick,”  Basa continued.

As far as Sister Flory can remember, the corporation was formed after the Basa-Guidote patriarch’s death.  “We thought of forming a corporation instead of dividing the property,” she said.

The nine siblings, she said, did not quarrel over the property even after their mother’s death. “We were raised by our mother to love each other,” she said.

“In fact, we do not want to talk about this (feud over the property),” she added.

When her niece Ana came to visit, “we talked about pleasant things, like any family,” Sister Flory said.

She said she harbored no grudge against Cristina and her husband.

“If they want to visit me, they are welcome. I do not know how to contact them. I want to talk about happy moments,”  she said.

“I have been a nun for 65 years. I have silver hair and a silver face. Pero hindi pa naman ako ulyanin (but I am not yet senile),” she said.

“Siyempre, nabigla siya (Of course he was shocked). Of course, that is expected, that they will deny it and we expected that. Alangan namang aminin niya(You expect them to admit it)?” Ana told the Inquirer in an interview.

She said it was the Coronas’ right to give their side. “I’m not here  to hurt anybody. We only wanted the truth to come out you know, and to get justice for everyone in the family.”

Ana said she expected the Corona couple to file a libel case against practically anyone who had hurt them. She stressed, “Your best defense is the truth.”

Ana said her aunt, Sister Flory Basa, was very happy to learn that the truth had finally come out upon reading the two-part Q & A in the Inquirer.

She described Sister Flory to be still in “very good health, with excellent memory.” She refused to comment any further to the Corona attacks.

Representative Niel Tupas Jr. said he welcomed the possibility of the defense presenting the Corona couple on the witness stand to answer all the allegations against them, including the ones hurled by Ana Basa.

Representative Romero Quimbo, the prosecution’s spokesperson, said in a press conference that there had been a talk among members of the prosecution on the possibility of presenting Ana, Sister Flory and even Supreme Court Associate Justice Ma. Lourdes Sereno in its rebuttal to the defense should it finally decide to present the Corona couple on the witness stand.

Aurora Representative Juan Edgardo Angara said Ana’s revelations reinforced what the prosecution said from the first day of the impeachment trial that Corona, while maybe intellectually competent, did not possess the other requisites like integrity and probity required by the Constitution. With reports from Cynthia D. Balana and Marlon Ramos