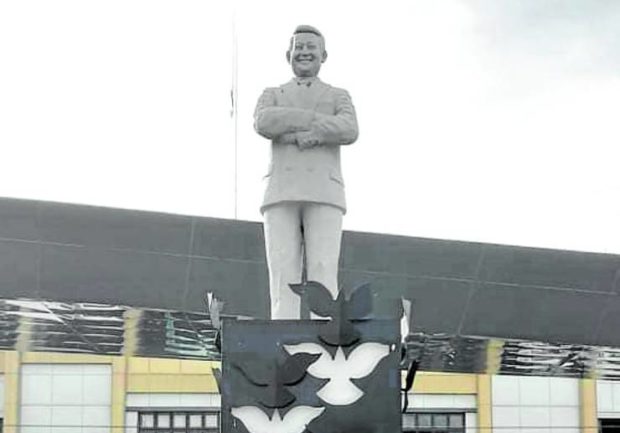 TARLAC CITY, Tarlac, Philippines — Wreaths of flowers were offered to the statue of the late Sen. Benigno “Ninoy” Aquino on Sunday, a day after his image was “disrespected” when it was covered by a tent and a tarpaulin during the grand rally on Saturday of the tandem of presidential aspirant Ferdinand Marcos Jr. and running mate Davao City Mayor Sara Duterte at Tarlac City plaza and sparked an online backlash.

Pink and yellow ribbons were tied in the flowers with lace bearing “Ninoy, hindi ka nag-iisa (you are not alone).”

Tarlac was the home province of the late senator and chief rival of the elder Marcos, who once declared that the Filipino “is worth dying for.”

The statue of Senator Aquino, whose assassination in August 1983 became one of the catalysts that led to the People Power Revolution in Edsa in 1986 that toppled the strongman rule of Ferdinand Marcos, was covered by a tent during the Marcos Jr.-Duterte UniTeam political grand rally.

“They could have just held it in another venue or at least, put the tent beside the monument, but not in front,” said Tarlac historian Xiao Chua.

“It might have been unintentional, or just plain lack of common sense on the part of the organizers, but it was an unfortunate slap to the province’s historic legacy and furthers the politically divisive climate with deep implications,” Chua added.

Several Tarlaqueños and martial law survivors cried foul at what they called “disrespect,” not only to the Aquinos but also to those who suffered under the martial law regime.

Tarlac City Mayor Ma. Cristina “Cristy” Angeles, who was present during the rally, has told her critics to “move on.”

“Ignore those who criticize. It’s time for forgiveness and healing, we will unite,” Angeles said told reporters on Saturday.

But she was mum on who ordered the Ninoy monument to be covered, even as Tarlac residents expressed their disappointment with her decision to back the UniTeam.

Angeles’ mother, Teodora Cuello, is a known supporter of the late President Corazon Aquino and serves as one of the officers of Cory’s Piso’t Puso foundation in Tarlac. The mayor’s husband, contractor Victor Angeles of Northern Builders, has bagged projects during the administration of the late President Benigno Aquino III.

“She has to apologize to her own constituents. She disrespected a son of Tarlac [Ninoy Aquino]. The person she disrespected was a governor, mayor, and congressman [from Tarlac City],” lawyer Jo Clemente of RPC said.