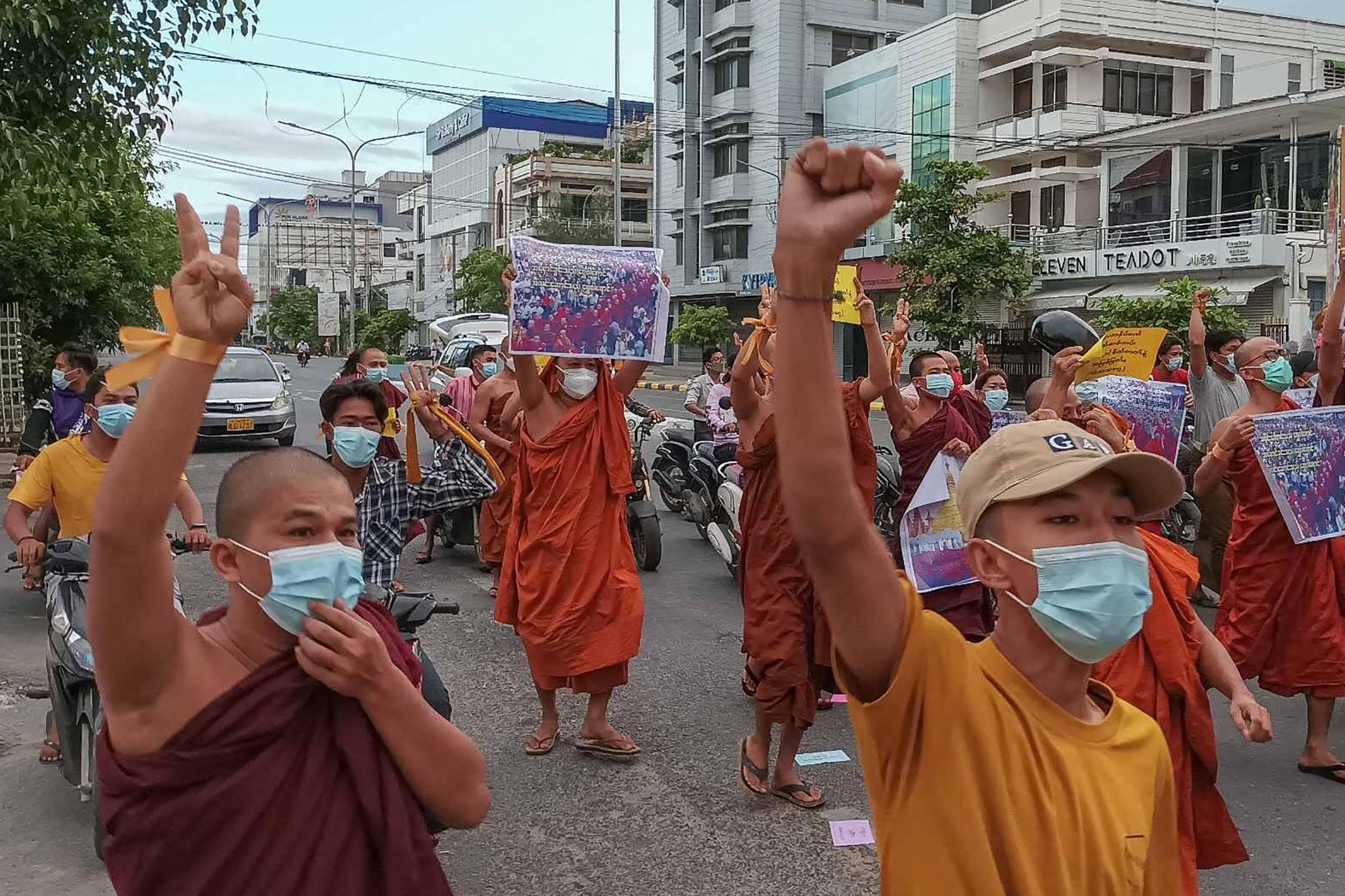 Pro-democracy Buddhist monks and other supporters take part in a demonstration against the junta in Mandalay on September 25, 2021, marking the 14-year anniversary of the 2007 Saffron revolution. (Photo by STR / AFP)

MANILA, Philippines — Presidential bets on Sunday gave their positions on the ongoing crisis in Myanmar that followed the rise of a junta that took power in a coup last year.

During the second presidential debate hosted by the Commission on Elections (Comelec), labor leader Leody de Guzman said the Philippine government should have a clear stand on the ongoing repression in Myanmar.

(The government should have a clear stand and oppose the repression happening in Myanmar because it violates the democratic rights of people there.)

(Asean should be reminded that there is a strong agreement to respect human rights for every citizen in the Asean.)

However, De Guzman noted that the Philippine government should be the first to respect the rights of its citizens.

(Myanmar is in a similar situation. The Philippines, as part of the United Nations and the community of nations who signed the UN declaration of human rights, should join the declaration of Asean countries to call for other countries and Myanmar to stop repression against their citizens.)

Meanwhile, candidate Faisal Mangondato said the national interest of the Philippines must be protected.

“Dapat po unang-una ‘yung nasyon, ang national interest po natin (our national interest) must be protected based on multidimensional as well as the ecliptic understanding of the situation where the West Philippine Sea is located. Secondly, in our foreign policy, nation must project a united stand,” he said.

Mangondato added that the Philippines should maintain a good relationship with other nations through trade and sharing of culture.

(Senator Lacson is correct. We should demand from other co-member countries in this organization their obligation.)

Meanwhile, Pacquiao pointed out that the Philippines should maintain a good reputation to provide a more credible position on the matter.

(It is hard to provide a position if our country does not have a good reputation.)

(The image of our country is bad, there is corruption, what happens here is not good that’s why we don’t have a voice to express our position to suggest anything, because even us here are having difficulties.)

ASEAN summit without Myanmar leader significant, but not enough – U.S.