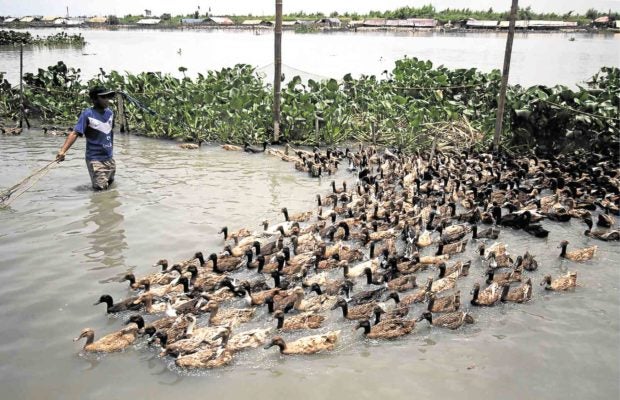 Hundreds of ducks swim in Laguna de Bay in Taguig City as duck raisers worry about the avian flu outbreak which has affected three towns in Pampanga and Nueva Ecija. —RICHARD A. REYES

MANILA, Philippines — The transmission of avian flu virus from birds to humans is very rare, the Department of Health (DOH) gave assurance on Friday after the Department of Agriculture (DA) confirmed outbreaks of the avian influenza H5N1 in some areas.

Health Undersecretary Maria Rosario Vergeire said the outbreak does not present a major public health concern at the moment.

(The Department of Agriculture declared an avian flu outbreak yesterday. However, the public does not need to worry because the chance of transmission of the avian flu to humans is low.)

(According to the World Health Organization, the transmission of avian flu from birds to humans and humans to humans is very rare, meaning it does not happen often.)

However, Vergeire still urged the public to take precautionary measures.

She also noted that since the avian flu is a respiratory infection, the current minimum public health standards against COVID-19 will also be effective against the disease.

(We advise the public to avoid contact with wild birds, sick birds, or individuals who had close contact with sick birds. At the same time, we should continue to practice minimum public health standards.)

The department issued a memorandum circular that restricts the movement of ducks, quail, chicken, and other poultry commodities in affected areas, specifically those coming from the 1-kilometer quarantine zone.