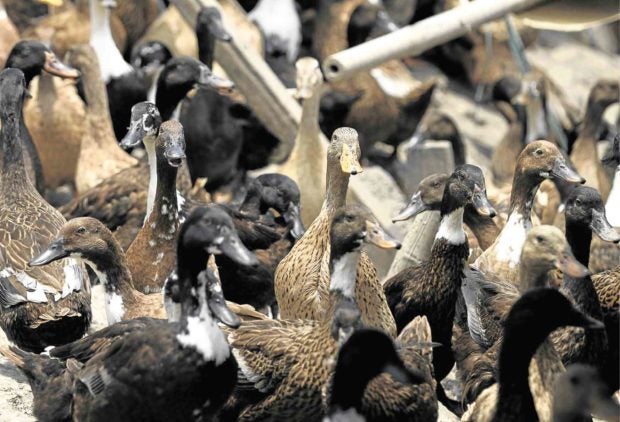 It issued a memorandum circular that governs the movement of ducks, quail, chicken, and other poultry commodities in affected areas, specifically those coming from the 1-kilometer quarantine zone.

“We need to act immediately to control avian influenza — which was initially detected in a duck farm in Bulacan and quail farms in Pampanga — so that we can prevent further spread and damage to our poultry industry,” Agriculture Secretary William Dar said in a statement.

“The avian influenza virus detected is of subtype H5N1, which is also a threat to human health. This is the very reason we have to double our efforts in controlling and containing bird flu, and we can accomplish this through cooperation – especially those who are engaged in poultry production,” he added.

Meanwhile, DA-Bureau of Animal Industry (BAI) Director Dr. Reildrin Morales said that “farm owners must comply with the transport requirements in compliance with the prescribed surveillance period, diagnostic tests, and biosecurity protocol of the World Organization for Animal Health (OIE).”

Morales noted the DA memorandum circular on the implementing rules and regulations on the transportation of domestic and captured wild birds, poultry products, and by-products amid the threat of the avian influenza outbreak.

He said the memo gives local governments and poultry industry stakeholders direction on the transfer of live birds, poultry products, and by-products from Luzon to Region 4-B or MIMAROPA, Visayas, and Mindanao.

Confirmed H5N1 infections have also been detected in the provinces of Nueva Ecija, Bataan, Tarlac, Sultan Kudarat, and Benguet, according to Morales.

Morales also said the DA-BAI has been undertaking surveillance in all affected areas in close collaboration with local government units and the private sector, and the Department of Health (DOH), which is monitoring suspected H5N1 transmission of the virus to humans. The agency said that DOH personnel has yet to find any indication or symptom in any of the outbreak sites.

The DA-BAI director also noted that 31 of the 38 nations that reported H5N1 detection since the fourth quarter of 2021 still have ongoing cases. These countries include the United States, Canada, South Korea, Japan, and most European Union member countries, among others.

On the other hand, DA chief Dar urged the general public to cooperate to prevent the virus spread and report immediately to the department if they know of suspected cases of the avian flu.

“We made it possible to be avian flu-free in previous outbreaks, we could still do that again, but we need your help,” he said.

“Let me reiterate to our stakeholders, especially the LGUs and the poultry raisers – please report cases immediately. You are the first to know if there are suspected cases as you are working on the ground. So, we depend and rely on you in this battle against avian flu,” he added. – Jericho Zafra, intern