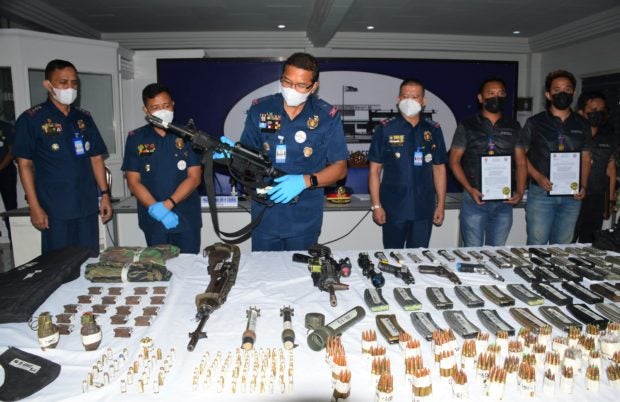 CAGAYAN DE ORO CITY––The Police Regional Office-10 announced Thursday that they have raided the residence of the leader of a gun-for-hire syndicate based in Lanao del Norte, as law enforcers continue to crack down on private armed groups and owners of illegally possessed firearms to secure the May 9 elections.

Brig. Gen. Benjamin Acorda Jr., Northern Mindanao police director, said a team composed of personnel from various units staged the raid on the houses of a certain Cabantog Alompo, said to be the leader of the group that bears his name.

Also arrested during the operation was Madrigal Alompo.

“The Cabantog Alompo Group, a newly identified gun-for-hire group operating in Lanao Del Norte and nearby provinces, are responsible for some election-related violence recorded in the province in the past,” Acorda told reporters during a press briefing Thursday evening.

He said the team served two search warrants issued by a local court, one at Purok Alompo and the other at the Alompo compound, both in Barangay Poblacion of Tangcal town, Lanao del Norte.

Seized during the raids were high-powered firearms, including pistols of varying calibers, an M14 rifle, a caliber 5.56 Bushmaster rifle, and a caliber 5.56 rifle with a marking indicating it’s the property of the Armed Forces of the Philippines, and dozens of ammunition.

Acorda said they were investigating how a gun-for-hire group obtained a military-owned weapon.

The operation is based on information that the group is offering their services and ready to accept any job related to the May elections, he said.

He added that they could not yet connect the group to extremist armed groups in the Lanao del Norte and Lanao del Sur provinces.