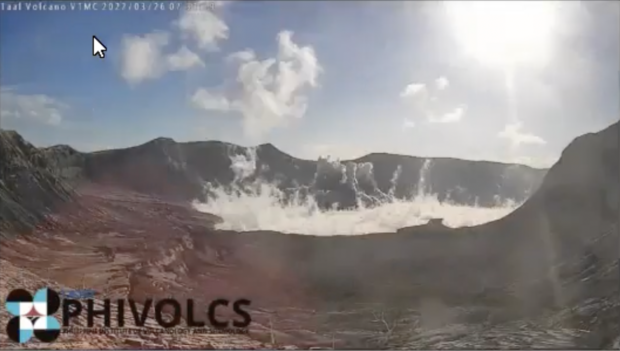 This screengrab of a Phivolcs press conference presentation showed an IP camera relapse of phreatomagmatic activity at the Taal Volcano main crater that began at 7:22 a.m. on March 26, 2022, and abated at 8:59 a.m. (Photo from Phivolcs.)

MANILA, Philippines — The Alert Level 3 declared over Taal Volcano may be lowered to Alert Level 2 if it will have no more eruptions in the next two weeks, Undersecretary Renato Solidum, director of the Philippine Institute of Volcanology and Seismology (Phivolcs) told President Rodrigo Duterte in his weekly taped “Talk to the People” briefing on Tuesday.

“At the moment, Alert Level 3 can be maintained,” Solidum said, speaking in Filipino. “If it continues to subside starting today and there are no more explosions we can downgrade to the alert level within two weeks.”

That means there is “magmatic intrusion at the main crater that may further drive succeeding eruptions.”

Following the eruption, the residents from several nearby areas were evacuated,

These areas are Barangays Banyaga and Bilibinwang in Agoncillo; Buso-Buso, Gulod, and Bugaan East in Laurel; Palsara in Balete; Quilling in Talisay; and Don Juan in Cuenca.

Meanwhile, all activities at Taal Lake were stopped.

According to Solidum, Phivolcs is monitoring the movement of magma at the volcano, especially when it is possible that magma from 5 kilometers below would rise to the surface.

If it does, Phivolcs would be compelled to place the volcano on Alert Level 4 since stronger explosions can be expected.

“We are monitoring it because there’s magma at 5  kilometers, and it may rise, like what happened in January 2020, and that brought along a lot of gas. And that is what will trigger stronger explosions,” Solidum said.

Over 3,000 individuals in evacuation centers amid Taal Volcano unrest