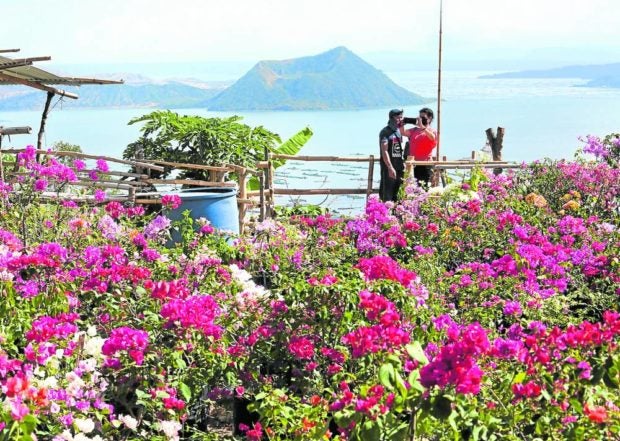 LUCENA CITY, Quezon, Philippines — With Alert Level 3 raised over Taal Volcano after a “phreatomagmatic” explosion early Saturday, local officials have told over 5,000 people from the towns of Agoncillo and Laurel in Batangas province to remain in evacuation centers.

The Disaster Risk Reduction and Management Office of Agoncillo reported that as of 1:30 p.m. on Sunday, 661 families (2,239 individuals) had been evacuated from the high-risk villages of Banyaga and Bilibinwang and taken to nine shelters. The villages are located within the volcano’s 7-kilometer danger zone.

“They will remain in evacuation centers until such time that the alert level is down from 3 to 2,” Agoncillo Mayor Daniel Reyes said in a phone interview.

He added that several residents had been evacuated as well from the nearby towns of Alitagtag, Calaca, Sta. Teresita, San Luis and Tagaytay City.

Venus de Villa, Laurel disaster risk reduction management office chief, said that the town had 1,670 people or 473 families in six evacuation centers, in addition to 1,187 other people or 268 families who had sought shelter in the houses of their relatives or friends.

Local authorities, however, have allowed the displaced residents to return to their houses to check on their property and get some belongings.

The Philippine Institute of Volcanology and Seismology (Phivolcs) raised alert level 3 at Taal Volcano when it recorded a “phreatomagmatic burst”—a type of volcanic explosion that occurs when magma comes into contact with water—at 7:22 a.m. on Saturday.

According to the agency, Taal would remain under alert level 3 after two more eruptions were recorded on Sunday morning.

In an advisory, Phivolcs said the phreatomagmatic bursts happened at 4:34 a.m. and again at 5:04 a.m, with plumes ranging in height from 400 to 800 meters.

It added that the main crater continued to generate hot plumes that reached one kilometer in height while sulfur dioxide (SO2) emission averaged 6,957 tons/day.

According to Phivolcs, alert level 3 means the presence of “a magmatic intrusion at the main crater that may further drive succeeding eruptions.”

It said that entry into Taal Volcano Island, which has been declared a permanent danger zone, was prohibited.

At the same time, Phivolcs recommended the evacuation of people on Taal Volcano Island and the high-risk barangays of Bilibinwang and Banyaga in Agoncillo town, in addition to Boso-boso, Gulod, and eastern Bugaan East in Laurel town in Batangas province “due to the possible hazards of pyroclastic density currents and volcanic tsunami should stronger eruptions subsequently occur.”

“All activities on Taal Lake should not be allowed at this time. Communities around the shore are advised to remain vigilant, take precautionary measures against possible airborne ash and vog (volcanic smog) and calmly prepare for possible evacuation should unrest intensify,” it said.

Reyes, meanwhile, stressed that no election candidates, whether local, provincial or national, would be allowed to campaign inside the shelters.

“Campaigning is prohibited inside the evacuation centers. Agoncillo is now COVID-19 free. We want to protect our residents,” he said.

But donations and other forms of assistance from candidates would be accepted.

Batangas Gov. Hermilando Mandanas said that donations for evacuees must be coursed through and done in coordination with Philippine Red Cross.