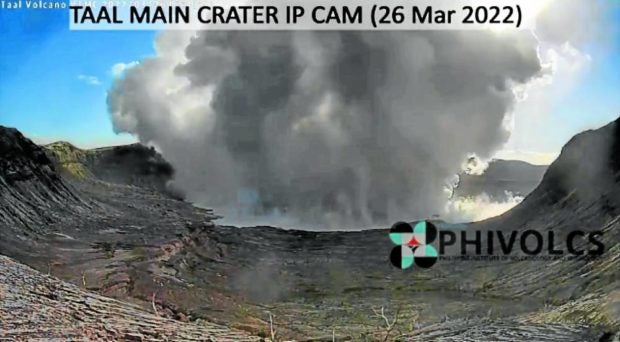 Phivolcs in its latest update, reported that the two subsequent events were recorded at 4:34 a.m. and 5:04 a.m.

Phivolcs likewise recorded 14 volcanic earthquakes in the past 24 hours, including 10 volcanic tremors which lasted two to three minutes and four low-frequency volcanic quakes.

Plumes as high as 1,000 meters, which drifted southwest, were also caused by the upwelling of hot volcanic liquid in Taal Lake, said Phivolcs.

Meanwhile, the volcano and its adjacent areas are still under Alert Level 3 (magmatic unrest) which means that there is “a magmatic intrusion at the main crater that may further drive succeeding eruptions.”

Phivolcs has ordered the evacuation of Taal Volcano Island and high-risk barangays of Bilibinwang and Banyaga in the municipality of Agoncillo and Boso-boso, Gulod and eastern Bugaan East in Laurel, Batangas due to the possible danger of “pyroclastic density currents and volcanic tsunami should stronger eruptions subsequently occur.”

Activities in Taal Lake are also suspended, with communities surrounding the vicinity being reminded to be vigilant.

Phivolcs also advised pilots to avoid flying near or over the volcano due to airborne ash and ballistic fragments from sudden eruptions.