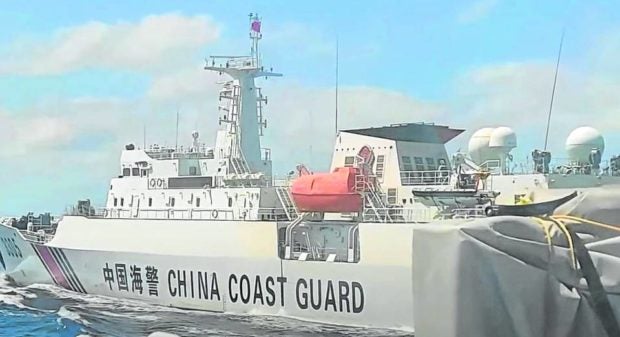 MANILA, Philippines — China has warned the Philippines against “interfering” with its patrols at Bajo de Masinloc, saying the shoal and its waters are part of Chinese territory.

The Philippine Coast Guard (PCG) earlier reported that a China Coast Guard (CCG) vessel came dangerously close to one of its patrol ships near the shoal in a “close distance maneuvering” incident on March 2.

“China has sovereignty over Huangyan Dao and its adjacent waters as well as sovereign rights and jurisdiction over relevant waters,” he said.

“We hope that the Philippine ships will earnestly respect China’s sovereignty and rights and interests, abide by China’s domestic law and international law, and avoid interfering with the patrol and law enforcement of the China Coast Guard in the above-mentioned waters,” Wang said.

“The Philippine position is we continue to exercise full sovereignty over Bajo de Masinloc and its territorial sea, as well as sovereign rights and jurisdiction over the surrounding [exclusive economic zone] and continental shelf,” acting presidential spokesperson Martin Andanar said in a statement on Tuesday.

China seized control of the shoal in 2012 after a standoff with the Philippine Navy. This prompted the Philippines to challenge China’s sweeping claims to the South China Sea, including the West Philippine Sea, in the international arbitral tribunal.

In 2016, the tribunal invalidated China’s claims demarcated by its nine-dash line and ruled, among others, that the waters around the shoal were traditional fishing grounds to be shared by several countries, including the Philippines, and that China had interfered with these rights by restricting access to the area.

Beijing has repeatedly refused to recognize the ruling.

“Beijing has no right to dictate who can stay and who will be ejected from the seas that they have no legal and political claim,” Pamalakaya said in a statement.

“We assert to China our freedom of navigation, especially our right to fish in our territorial waters,” it said.

The PCG reported on Sunday that CCG 3305 came within 19 meters of the BRP Malabrigo.

It said that it was the fourth close encounter off the shoal since last year and was a “clear violation” of international regulations to prevent collisions at sea.

Commenting on the incident, the Japanese ambassador to the Philippines, Koshikawa Kazuhiko, reiterated his government’s position “that any actions by force or coercion are utterly unacceptable.”

“The rules-based international order is more important than ever for every country, regardless of its size,” Koshikawa said in a Twitter post on Monday.

Japan has its own maritime row with China in the East China Sea, where China insists it owns the Japanese-administered Senkakus, which are five uninhabited islands.

The Department of Foreign Affairs (DFA) has yet to make a statement on the CCG vessel’s risky maneuver.

Tensions between Beijing and Manila spiked in 2021 after hundreds of Chinese vessels were detected at Julian Felipe (Whitsun) Reef in the resource-rich Spratlys archipelago.

No one was hurt in the incident, which forced the boats to abort their mission, prompting Foreign Secretary Teodoro Locsin Jr. to condemn and protest against the Chinese action, and reminding China that a public vessel is covered by the Philippines-US Mutual Defense Treaty.

The DFA recently summoned China’s ambassador over the presence in the Sulu Sea of a Chinese reconnaissance ship, which the Philippine military said was eavesdropping on an ongoing joint Philippines-US military exercise early this year.

On Tuesday, the US Department of State said a senior policy adviser to Secretary of State Antony Blinken will visit Manila to “reaffirm our unwavering commitment to the US-Philippines alliance.”

Counselor Derek Chollet will consult with Philippine officials on joint efforts to support the rule of law and ensure freedom of navigation in the South China Sea, it said in a statement.

His visit is part of a trip to the Philippines, Vietnam, and Japan from March 28 to April 2.

“Counselor Chollet will reaffirm the US commitment to our Indo-Pacific allies and partners, and engage with key stakeholders on bilateral and regional issues, including efforts to seek a peaceful return to democracy in Burma (Myanmar),” the state department said.

The US official is also expected to discuss democracy and human rights as well as regional issues, Washington’s relations with the Association of Southeast Asian Nations (Asean) and the impact of Russia’s invasion of Ukraine.

The Chinese Foreign Ministry spokesperson also said Locsin and three other foreign ministers from Asean would be visiting Beijing separately for talks from March 31 to April 3.

According to Wang, Beijing hopes to have “in-depth exchanges of views” with the four countries on the current regional and international situation.

—WITH REPORTS FROM LEILA B. SALAVERRIA AND FRANCES MANGOSING

PH fishers in ‘hide-and-seek’ with Chinese ships at Scarborough

What Went Before: Panatag Shoal standoff

Read Next
Pacquiao ain’t throwing in the towel
EDITORS' PICK
Why Tagle is a leading papal contender
A laptop that maximizes your WiFi so you can maximize your productivity
Powered by style, innovation and passion
House energy committee chair Arroyo bats for cheap electricity
PH resumes talks with China on Chinese-funded transport projects
PH may import sugar around October if supply runs out
MOST READ
PVL: Celine Domingo gets big surprise as Creamline’s Finals MVP
John Arcilla cries foul over death threats for his ‘Ang Probinsyano’ role: ‘Serye lang, walang personalan’
Imee Marcos bares illegal importation of white onions
Why Tagle is a leading papal contender
Don't miss out on the latest news and information.