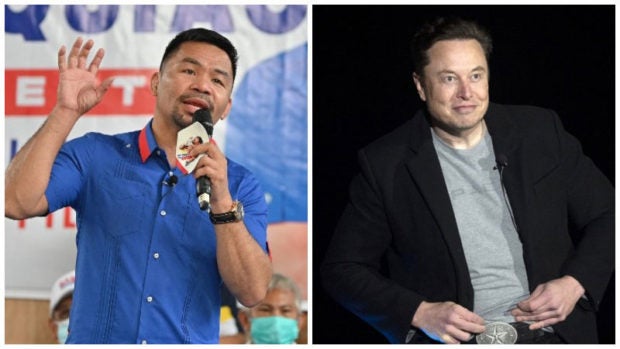 Because of this, Pacquiao said telecommunications service providers in the Philippines should step up in improving the quality of their products.

(The meeting is for improving the internet signal in the country. It’s good. It has big potential. It will have good results. I’m sure I’m not the only one excited, but also the Filipino people, in the prospect that all corners of the country will have an internet signal.)

Pacquiao noted that after President Rodrigo Duterte signed the Public Service Act, foreign telcos like Space X’s Starlink are now allowed to enter the Philippine IT market even without a partnership with a Filipino firm.

Pacquiao was accompanied by Senator Koko Pimentel in the meeting that was also attended by Space X  Senior manager for foreign relations Rebecca Hunter and Philippine representative Ramon Garcia.

“I have no doubt that the entry of Space X into the Philippines would be a major game-changer, especially in the IT sector. We would definitely see a major upgrade to our IT infrastructure. There will be no more lags and no place unreachable,” Pacquiao said in a statement released later.

According to Pacquiao’s statement, Space X’s Starlink is the world’s one and only global broadband network provider. It hosts a constellation of multiple low orbit satellites that covers the entire globe and because of that, internet speed is dramatically faster, the coverage is limitless, and is insusceptible to weather conditions if compared with other broadband network systems, especially those being used by local internet service providers, it added.

“I also hope to see greater collaboration among global tech giants like Space X with our local IT service providers so that they too can keep up with the demands of the IT market. We all have to work together for a better life for all Filipinos,” he said.

During the meeting in January, Pacquiao and Pimentel discussed with Hunter and other Space X executives various areas of cooperation not only on improving the country’s IT infrastructure but also in other areas of investment, according to the boxing champion’s camp.

Pacquiao even raised the possibility of using Tesla batteries for the jeepney modernization and the creation of a massive subway system using the Boring Company to decongest Metro Manila and other urban cities in the country. Both Tesla and Boring Company are also owned by Musk.

He also told the Space X executives to also consider the possibility of establishing a launchpad in the Philippines especially in Mindanao as this would not only put the Philippines on the map of space exploration but would also generate thousands of jobs for Filipino scientists, engineers, and laborers, according to the press release.