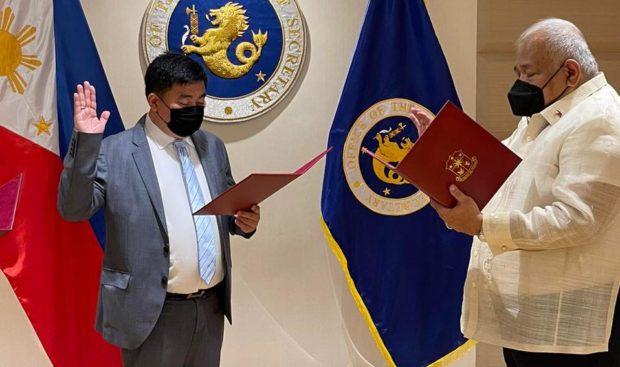 MANILA, Philippines — PDP-Laban faction secretary-general and Cabinet Secretary Melvin Matibag on Tuesday said he is hoping President Rodrigo Duterte will personally endorse the presidential candidacy of Ferdinand Marcos Jr. for the May 9 elections.

While the PDP-Laban as a party has decided to endorse Marcos, and Duterte is the chairman of the party, Matibag said he does not want to preempt if the President will also endorse the son of the late dictator.

“I don’t want to speculate but as a PDP-Laban, we already made the endorsement of [former] Senator Bongbong Marcos to be the next president. I’m also hoping that the President will make a personal endorsement,” Matibag said in a press conference.

(So we hope that before the May 9 polls, Duterte will give his endorsement but I don’t want to preempt him in his personal endorsement of his successor.)

Matibag said that while the PDP-Laban officially endorsed Marcos’s presidential bid, it is still up to Duterte to directly endorse his preferred candidate for the presidency.

Senatorial candidate and former chief presidential legal counsel Salvador Panelo said that Duterte does not need to give his official endorsement since he has repeatedly said he wants a candidate who will continue his programs.

(When we talked, he said he is being neutral but I think, there is no need for an outright endorsement because it is clear from his statements that he wants someone who would continue his reforms in the government.)

He, however, said that Duterte may not endorse a candidate who is always opposed to his decisions and who has maligned him since the start of his administration.

The PDP-Laban faction headed by Energy Secretary Alfonso Cusi has endorsed the presidential candidacy of Marcos.

Marcos said that this endorsement “will consolidate the forces of unity so that we can continue to work against those who would want to divide Filipinos against each other.