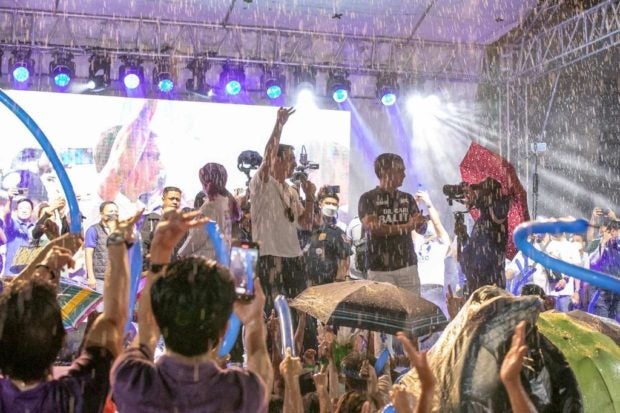 Aksyon Demokraitko standard bearer Isko Moreno and the rest of the party candidates remain in high spirits despite getting rained on during a campaign sortie in Sultan Kudarat. Photo from Isko Moreno Domagoso media bureau

CAGAYAN DE ORO CITY, Misamis Oriental – Aksyon Demokratiko standard bearer Isko Moreno Domagoso was overwhelmed with emotions as a heavy downpour, along with his entreaties, did not dampen the outpouring of support from thousands of Cagayan de Oro residents who attended his grand rally in this Northern Mindanao city.

The Aksyon Demokratiko rally started typically enough with prayers and the playing of the national anthem. But then a light drizzle began to fall just when the program proper started, forcing Mayor Isko to plead to his supporters to just go home lest they get sick. 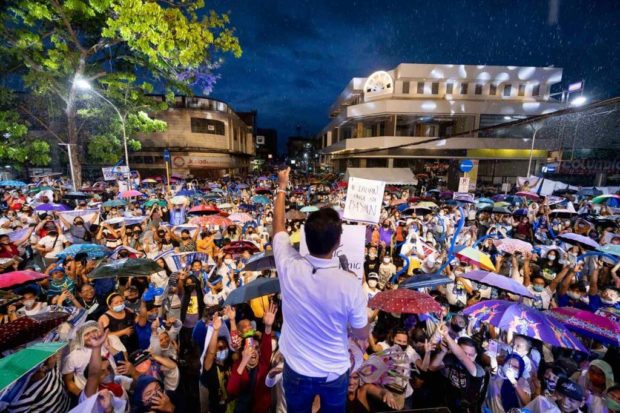 Moreno reiterated his commitment to find ways to improve the lives and livelihood of Filipinos should he win in the upcoming elections.

If elected president, Moreno has vowed to pursue a “Life and Livelihood” economic policy that aims to address poverty, hunger, unemployment, inequality and social injustice through though the effective, efficient and prudent management of government resources under an open, transparent and inclusive administration, as spelled out under his 10-point Bilis Kilos Economic Agenda.

Through it all, the ordinary people stuck with Mayor Isko. It seemed like no force of nature can stop them from showing their overflowing love and full support to their young presidential candidate. The heavier the rain fell, the more electric and ecstatic they became, drowning the noise of the cascading rain with their wild cheering of “Isko, Isko, Isko.”

The overwhelming and awe-inspiring show of support left the usually ebullient Mayor Isko at a lost for words to expressed his heartfelt gratitude to his mass of supporters.

Moreno said it was the first time in his 24 years of public service that he witnessed such love from the crowd, who never left their candidate despite heavy rains.

The grand rally capped a hectic day of campaigning for Moreno in Misamis Oriental. Prior to going to Cagayan de Oro City, Moreno and the rest of Team Isko embarked on a series of motorcades and town hall meetings at Gingoog City, and the towns of the towns of San Juan and Balete where thousands of Batangueňos mobbed their “future President.”

Prior to going to Cagayan de Oro City, Moreno and the rest of Team Isko embarked on a series of motorcades and town hall meetings at the towns of Medina, and Balingasag where thousands of Northern Mindanaoans mobbed their “future President.”