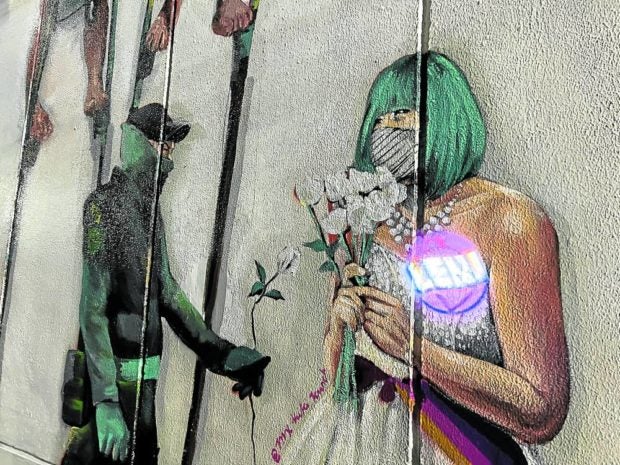 UNIQUE TACTIC | Supporters of Vice President and presidential candidate Leni Robredo in Baguio City resort to light beams in this photo taken on March 5, 2022, as an alternative to campaign posters at the height of the “Oplan Baklas” operation of the Commission on Elections aimed at dismantling election-related materials. This was conceptualized by the UP Artists’ Circle. (Photos by  MAGGIE FOKNO / CONTRIBUTOR)

BAGUIO CITY, Benguet, Philippines — A Baguio court’s order stopping the Commission on Elections (Comelec) from requiring local campaign volunteers of presidential candidate Vice President Leni Robredo to secure permits for their activities may have been rendered moot when this city was categorized under Alert Level 1, a poll official said on Monday.

Campaigns in communities under the most lenient alert status may proceed without a permit, which was only required in places with higher health restrictions like alert levels 2 and 3 to reduce or eliminate COVID-19 infections during the 2022 national and local elections, said lawyer Ederlino Tabilas, director of the Comelec in the Cordillera.

Violations of the rules (governing campaigns under a pandemic) are not only criminally liable under election laws, “but also the guidelines set by the COVID-19 Inter-Agency Task Force,” he said at a briefing.

The petition for declaratory relief and the nullification of this special campaign rule filed by members of One Baguio Benguet-Robredo People’s Council argued that volunteers should not be required to secure campaign rally permits or provide details about their expenses because they are neither part of a candidate’s official campaign group nor are they supervised by them.

Asked about Tabilas’ comments, lawyer Karina Gay Balajadia-Liggayu, one of the petitioners, said the change in alert level status had no bearing on the Baguio case.

“We still need a ruling. What if the alert level changes?” she told the Inquirer.

It no longer requires campaigns to secure Comelec permits in alert level 1 areas, although these activities are still subject to the health ordinances of local governments.

“Regardless of the amendment, at the time of the enactment of [CR 10732], it was an overreach for Comelec to police election campaign activities, not just rallies, to comply with health standards because that is the lookout of the local governments and the Department of Health,” said Liggayu and copetitioner, lawyer Maarin Makalintal-Cabato, in a separate statement.

They said it was also an overreach to include volunteer groups in the operation of the resolution in the first place.