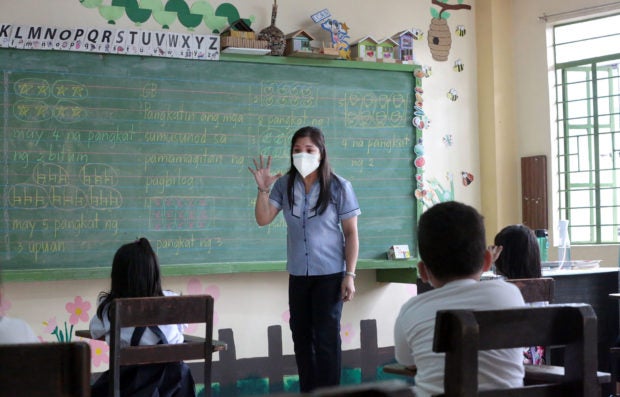 The Department of Education (DepEd) is eyeing the easing of requirements for the implementation of in-person classes as Metro Manila and other areas shift to a “new normal” starting this month. (File photo by GRIC C. MONTEGRANDE / Philippine Daily Inquirer)

MANILA, Philippines — A teachers’ group has called out the national government for taking advantage of the generosity of teachers who used their own money for the preparation of in-person classes in their respective schools.

Teachers Dignity Coalition (TDC) chair Benjo Basas said they received reports from teachers who were paying for the expenses in classroom retrofitting because “if the classroom would not be improved, it’s the teacher’s fault.”

“There is nothing wrong with volunteering nor offering [financial assistance] sometimes but if it becomes more frequent, that’s exploitation,” he said in a livestream on the group’s official Facebook page.

Alliance of Concerned Teachers in an earlier statement also questioned the Department of Education (DepEd) on where the budget for school reopening was going after finding out in their school visitations in Tarlac that teachers shelled out money in preparation for in-person classes.

The group further called for a “swift mobilization” of funds to relieve the teachers of the financial burdens brought by the resumption of limited in-person classes.

“Our teachers are eager for in-person learning to resume as the learning crisis has reached alarming levels. However, it is not fair that they and their already too meager salaries are made to bear the burden of physically preparing the schools,” Basilio said.

The DepEd on March 15 said it allotted around P1 billion to support the expansion of in-person learning.

A part of this budget will be used by schools to procure television, speakers and laptops in classrooms to support the blended learning approach, it said.

Annalyn Sevilla, DepEd undersecretary for finance, in an earlier press conference said a total of P5 billion had been distributed to the regions for the funds of learning resources.