Lacson: Party decision to drop me all about money 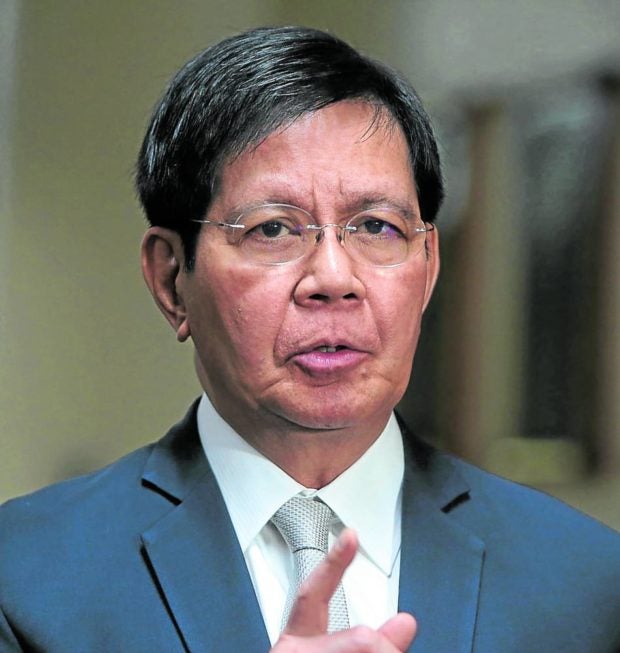 The abrupt decision by Partido Reporma to switch loyalty to Vice President Leni Robredo and to abandon him as its standard-bearer was about campaign funding, Sen. Panfilo Lacson said a day after he quit the party over its decision.

Saying it was “time to call a spade a spade,” Lacson on Friday disputed a statement by Davao del Norte Rep. Pantaleon Alvarez, the Reporma president, that the party’s decision to support Robredo was based on the senator’s poor survey numbers.

“It was actually more about the issue of campaign expenses for their local candidates,” Lacson said. “His chief of staff was asking for P800 million in additional funding which I honestly told him I cannot produce.”

“It is better that [we] both stop talking about this but if he insists on explaining his action, I’ll be prompted to respond to correct his statements,” he added.

Reacting to Lacson’s remarks, Alvarez said that the Vice President had a better chance of winning the presidency than Lacson, but he also admitted that funding a presidential campaign was a major consideration in withdrawing support for the senator.

The former Speaker said that because of the “harsh fiscal reality” of the 2022 polls, at least P779,406,000 would be spent on Election Day for two poll watchers who would be assigned to more than 389,000 polling precincts nationwide.

It would cost around P1,000 for each poll watcher’s training, food and transportation, he said.

Alvarez said he informed Lacson, the party chair, about the money needed “to sustain a credible effort on the ground.”

“Without the ability to cover for these costs, it was only right that we inform our local candidates—from Luzon, Visayas and Mindanao— and ground personnel about the true state of our fiscal affairs. And that is what I did,” he said.

As a result, Alvarez said that a “significant portion” of the party decided that if they were to continue campaigning voluntarily, they would rather support a candidate that had “a better—and not necessarily a certain—chance at winning.”

“Yes, as of date, it is a long shot,” he said of Robredo’s chances. “But in contrast to the other candidates, her long shot is better than longer shot.”

Barry Gutierrez, spokesperson for the Vice President, dismissed insinuations by Lacson that her campaign shelled out P800 million in exchange for Reporma’s support.

“Our campaign thrives on initiative and volunteerism, and we certainly do not have P800 million to give away to anyone,” Barry Gutierrez said on Twitter.

He said Robredo was “simply the very fortunate beneficiary” of Reporma’s decision.

In a television interview, Gutierrez said that beyond the support of local leaders in Davao region, he said the move also bolstered Robredo’s stature as a unifying leader who was willing to set aside political differences for the benefit of Filipinos.

“There is a huge symbolic value to the support from Partido Reporma,” he said.“(Alvarez) and Robredo have not always had a good relationship. They have been on opposite sides of the political fence at one point. But now, they are together, and that’s a very, very strong symbol that … it’s possible for them to find common ground moving forward and work together,” Gutierrez said.

Pangilinan is third placer in the surveys, but Robredo has repeatedly declared that he was her “only” choice for vice president.

Former Sen. Antonio Trillanes IV, who is running for a Senate seat again under the Robredo-Pangilinan team, said Alvarez’s move was a big boost to their campaign.

“Speaker Alvarez asked for forgiveness and was forgiven. That is the beginning of healing and unity,” the former Magdalo senator said.“Besides, according to the Magdalo survey, VP Leni’s weakest area is Davao region. So, surely this defection is a game changer!” Trillanes said.

Alvarez, who is running for his third and last term as representative of the first district of Davao del Norte in the May 9 polls, called on the Vice President’s supporters to tweak their campaign strategy by giving more attention to winning over village chiefs.

He said the approximately 9.75 million supporters of the Vice President were way more than the 42,000 barangay captains nationwide, outnumbering them 232 to 1.

“And that barangay captain, if we work together with him, especially since he has the existing relationship with local communities at large, builds a bridge that can unlock the doors to victory,” Alavarez said, adding that the Robredo campaign could “return the favor” by supporting them in the next barangay election.

“This is a good deal. Build the partnership, create the alliance, win the election,” he said.

That campaign format could be copied by other presidential candidates, but “our advantage is the drive and fighting spirit of the Robredo campaign volunteers, in addition to existing political machinery assets,” Alvarez said.

“I rarely see this kind of organic groundswell of support,” Alvarez said.

Read Next
Groups to BIR: Collect P203-B Marcos tax now
EDITORS' PICK
Geek out at TOYCON 2022 powered by Smart Signature
Unemployment rate up to 6% in May
Bye bye Boris: UK PM Johnson bows out with regrets but no apologies
House energy committee chair Arroyo bats for cheap electricity
High inflation: Your P1 is now worth only 87 centavos
High-risk pregnancy: Reducing your risk is in your hands
MOST READ
Suspect in grisly killing of missing woman in Bulacan arrested
Kim Atienza’s daughter flaunts bikini body in response to critics of her ‘revealing photos’
Bongbong Marcos’ first order: Abolish PACC, Office of Cabinet Secretary
Ex-Defense chief Lorenzana is the new BCDA chair
Don't miss out on the latest news and information.