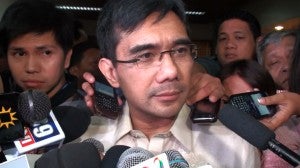 The prosecution panel on Tuesday said the Senate impeachment court’s denial of the defense motion to suppress the evidence on the Philippine Savings Bank deposits of Chief Justice Renato Corona was a “welcome development” in their fight to remove him from his post.

“We are moving close to our objectives which are the search for the truth and to exact public accountability,” Iloilo Representative Niel Tupas Jr., the lead prosecutor, said in a text message to the Philippine Daily Inquirer.

Tupas said the prosecution also felt “relieved” by the decision of the impeachment court to just admonish a private counsel, Vitaliano Aguirre II, for covering his ears when Senator-Judge Miriam Defensor-Santiago was talking.

He said both decisions were a “good sign” for the prosecution as it was preparing for the defense’s presentation of evidence next week.

Bayan Muna Representative Neri Javier Colmenares, another prosecutor, said the prosecutors were vindicated by the impeachment court when it denied the motion to suppress evidence.

This, he said, only meant that the Senate did not err in issuing the subpoena on Corona’s bank accounts, and that it was wrong for the defense to label this as an illegal act and therefore, inadmissible in court.

Colmenares said Corona should focus on presenting evidence to counter the prosecution’s evidence rather than seeking to suppress that were damaging to him. “We are now shifting in full gear in preparation for the defense presentation next week,” he said.

Colmenares said the prosecution was eagerly awaiting the decision of the impeachment court on its order to the defense to show cause why it should not be held in contempt for holding a press conference and charging the senators of being bribed by Malacañang with P100 million to favor the prosecution.

Marikina Representative Romero Quimbo, the prosecution’s spokesperson, said the Senate’s unanimous decision to accept the PSBank documents only proved that it was far more important to accept evidence than to exclude.

“Accepting evidence only strengthens whatever verdict it will render later on so we strongly congratulate the Senate,” Quimbo said.

Asked if the prosecution felt victorious with the Senate’s twin decisions, he said: “I think we all learned our lessons, but we don’t celebrate until the fat lady sings.”

Read Next
Teves tells of 2 meetings with Abalos, Chinese businessmen
EDITORS' PICK
Metro Manila posts lowest temperature yet this ‘amihan’ season at 19°C
DOH: 28,471 new COVID-19 cases in PH; active cases now 284,458
Gear up and get ready to play with Yamaha Mio Gear
Acer starts the year off strong with the Aspire Vero National Geographic Edition
On Day 2 of implementation, gov’t says workers now exempt from ‘no vax, no ride’ policy
Over 3 Million worth of prizes to be won at Smart Padala’s SENDali Manalo Promo!
MOST READ
Cold-case investigation names surprise suspect in Anne Frank’s betrayal
Emma Stone calls Andrew Garfield a ‘jerk’ after he ‘lied’ about his ‘Spider-Man: No Way Home’ appearance
Derek Ramsay on being married to Ellen Adarna: ‘Gumaan ‘yung mundo ko’
Czech anti-vax singer dies after deliberate infection
Don't miss out on the latest news and information.