Recruiters’ misinformation to blame for influx of walk-in consular applicants 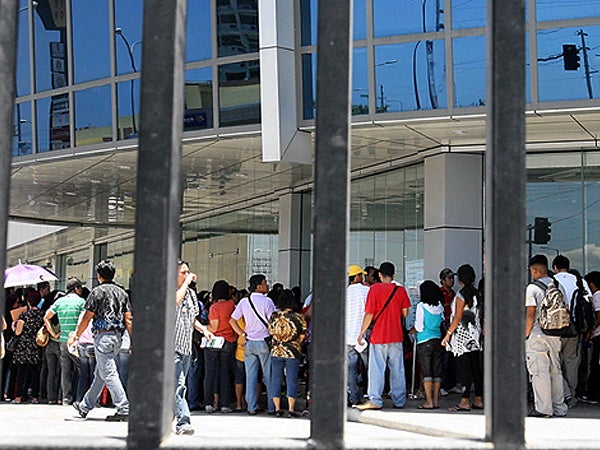 “DFA’s preliminary investigation into the incident revealed that several recruitment agencies had disseminated misinformation among their applicants regarding the Department’s walk-in policy,” the DFA said in a statement on Thursday.

“According to accounts of applicants, their recruitment agencies urged them to line up and stay overnight at DFA Aseana so that all their travel documents could be expedited,” it added.

Other applicants, meanwhile, conveyed that their respective agencies instructed them late at night to immediately proceed to the DFA-Aseana, according to the department.

“DFA considers this behavior of certain recruitment agencies highly irresponsible and malicious, not only for disregarding the DFA’s announced limits for walk-in applicants and attempting to monopolize DFA’s walk-in services to the detriment of other eligible applicants, but also for disregarding the welfare of our OFWs whom they ought to protect by putting them out in the streets in the middle of the night,” it said.

“According to reports, among those agencies which have given such instructions to their applicants are Silver Skilled Recruitment Inc., First Select International Manpower Services, Inc. and J.A.S. Empire International Promotion Corp.,” the DFA added.

On Tuesday night, around 800 walk-in applicants for apostille services appeared at the DFA Aseana office after the department announced it will begin accommodating walk-ins for said services. To service these applicants, the DFA had to stop apostille walk-in applications in its office in Aseana on Wednesday, Mar. 23.

“In light of recent events, the Department of Foreign Affairs assures the public that it is continuously working on improving its processes and systems while addressing issues pertaining to online fixers and scammers,” the DFA said.

“In response to the increasing demand for consular services following the easing of COVID-19 related restrictions, DFA re-opened its Authentication services and Passport Courtesy Lane to a limited number of walk-in applicants daily, while maintaining the online appointment systems for both services,” it added.

The DFA also urged the public not to line up beyond operational hours for safety and health reasons.

Aside from the DFA Aseana, walk-in consular applicants are also accommodated daily in consular offices located in the following malls:

The DFA, meanwhile, discouraged the public from transacting with fixers who claim to offer assistance in securing passport and authentication appointment slots while charging high fees.

“DFA is exerting all efforts and coordinating with relevant agencies to put a stop to the abuse of appointment slots by enterprising individuals and groups,” the DFA said.

“The Department heeds the public’s clamor and remains steadfast in its commitment to resolve issues surrounding consular services and delivering these services effectively to Filipinos,” it added.