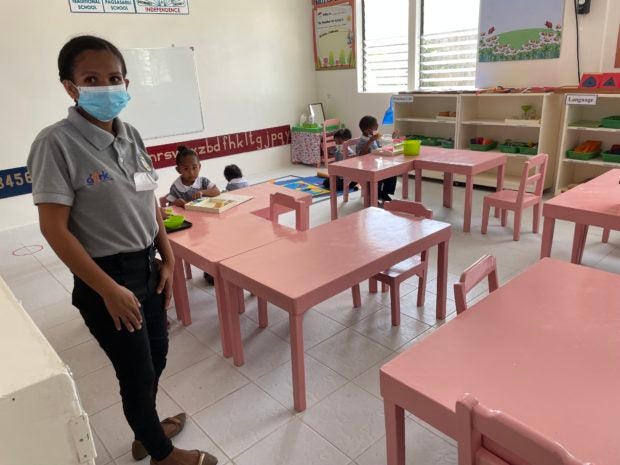 Inside the Clark Freeport is an ongoing program trying to develop trust between Aetas and the state-owned Clark Development Corp. (CDC). The education of Aeta children is a component in the program, called Pagsasarili, that former CDC chair Jose de Jesus began in 2019. (Photo by Tonette T. Orejas)

CLARK FREEPORT—The education of Aeta children in northern Clark has received a big boost after the Bloomberry Cultural Foundation Inc. opened two of five learning centers it is constructing in the Sacobia sub-zone on a P47-million grant, officials said.

He continued to support the program by serving as a consultant.

Three more structures are being built in Sitio Calapi, also in Marcos Village and in Sitios Burog and San Martin, both in Bamban.

At Monday’s launch, Pamintuan urged Aetas to “unite and work with the CDC” in a long-delayed joint management agreement for the use of some 10,000 hectares covered by Certificate of Ancestral Domain Title 025A in the sub-zone.

The pandemic required the first 50 learners to use modules, according to Vilma Mercado, one of four Aeta pre-school educators here.

Bloomberry, the social development arm of Solaire Resort & Casino, has increased its presence in Pampanga by helping fund the construction of a government-operated hospital that solely serves overseas Filipino workers, Bloomberry executive director Filipina Laurena said in an interview.