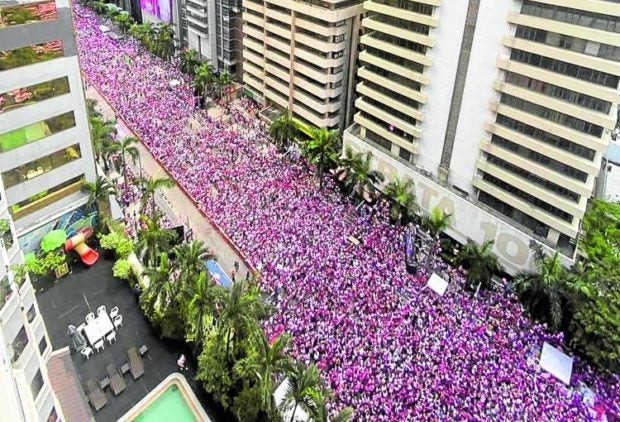 COLOR OF THE DAY Tens of thousands of supporters of Vice President Leni Robredo surge like a wave on Emerald Avenue in Pasig City during Sunday’s “PasigLaban” grand people’s rally. It was by far the largest crowd her ticket has gathered 50 days ahead of the May 9 vote. —ELMER GATCHALIAN/contributor

MANILA, Philippines — The branch of chicken wing restaurant Frankie’s at the Bonifacio Global City (BGC) in Taguig — which is at the center of controversy after staffers allegedly mistreated customers who are “pink” supporters — will be closed until Thursday for sensitivity and core values training.

The development was confirmed by Frankie’s management itself in a Facebook post on Wednesday, saying that the staffers who disrespected pink-clad supporters of presidential candidate Vice President Leni Robredo will be handled accordingly based on their policies under a Code of Conduct.

After reviewing the closed circuit television (CCTV) footage of the Crossroads BGC, the food branch deemed it necessary to apologize to the customers, and to conduct the training for the said branch and other outlets.

“Frankie’s as an organization would like to reiterate that the views of individual team members do not reflect the views of our entire company […] We acknowledge, however, that we are responsible for the actions of each member of our team. After cross-checking statements from different parties, along with reviewing footage, the team members involved will be handled in accordance with the policies stated in our Code of Conduct,” the company said.

“We will also be closing our Crossroads BGC branch starting tomorrow, March 23 up to March 24, 2022 to conduct a comprehensive Sensitivity and Core Values Training for the whole branch. Other branches will also be scheduled for similar sessions afterwards,” it added.

Frankie’s also assured its customers that they are willing to correct any untoward incident that may have stemmed from their own personnel.

“We have made mistakes in the past and we are truly sincere and committed to learning from them. We continue to ask for your empathy and understanding,” the company explained.

“Please know that we hear you and we will continue to work closely with our team on this matter,” it added.

The incident drew attention after a netizen said that he and fellow Robredo supporters who were dining at the said Frankie’s branch last Sunday — after the huge PasigLaban rally along Emerald Avenue — were jeered by staffers who shouted “BBM.”

“BBM” is the initials used by Robredo’s opponent in the upcoming elections, former senator Bongbong Marcos.

Aside from that, the netizen said that after complaining to the manager about the supposedly rude attitude from the Frankie’s staffers, the rest of the staffers just laughed about it, even joking that they would not clean the tables used by Robredo’s supporters.

The netizen also got the feeling that the staffers, believed to be supporters of Marcos, did not want to serve other customers wearing pink — the campaign motif used by the Robredo camp.

Frankie’s has since apologized to the group who complained about the Crossroads BGC branch.

With regards to concerns about staffers potentially dirtying or contaminating food of customers perceived to be supporters of the Vice President, Frankie’s assured that there are other CCTV cameras that would ensure that high standards of hygiene are maintained.

The CCTV camera also captured the incident and the apology made by the store manager after the customers complained about the rude staffer.

“Upon further investigation with those involved and review of the CCTV, our Store Manager apologized to the family on the spot regarding the incident involving our team member. We have also reached out and updated them on the steps we are taking to address the concern,” Frankie’s noted.

“We would also like to assure everyone that we have all the necessary safeguards such as CCTV cameras, hygiene standards, and the proper protocols in place to ensure food safety,” it said.

This is not the first time that both camps have shown hostile intent against each other: during a campaign drive held by Robredo supporters in Caloocan City, a supporter of Marcos was seen burning materials donated by the group.

On the other side of the spectrum, Robredo supporters on social media in the past called for a boycott of an Iloilo restaurant, just because they served Marcos when he was in the area.  Since then, Robredo has called on her supporters to be calm, denouncing such hostile actions against people from other camps.