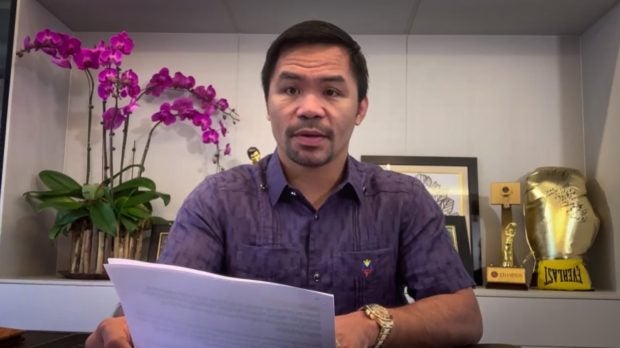 MANILA, Philippines — It is okay for presidential candidate Senator Manny Pacquiao that the office of Vice President Leni Robredo, one of his opponents in the presidential race, will be allowed to continue its pandemic-response programs during the campaign period.

Pacquiao on Wednesday said that it would be the people who would be benefitting from the initiative of Robredo’s office.

(Why would I be mad? Why would I restrict her when it would be the people who would benefit? It is helping the people, don’t forbid it.)

He made the remark after the Commission on Elections (Comelec) granted the request of the Office of the Vice President (OVP) to continue its pandemic-related programs, which was suspended in February as the campaign period started for national candidates.

These initiatives include the Bayanihan E-konsulta, Vaccine Express, Swab Cab and medical assistance program of the OVP.

Pacquiao said that he is happy that the programs will be continued.

(I am happy when there are initiatives like these. If people, especially the rich ones, are naturally helping, I might not have run. My mission is to see people helping others.)