‘We don’t talk anymore’: Pimentel ‘no longer a personal ally’ of Duterte 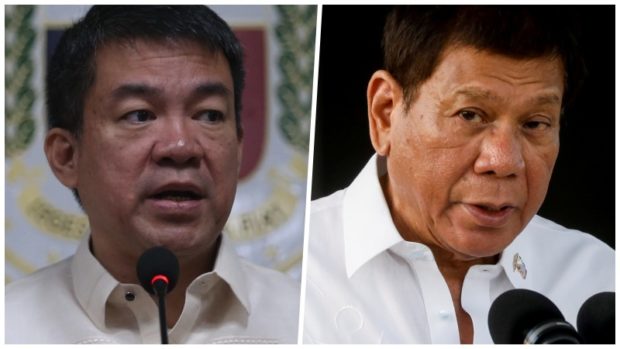 “No longer a personal ally because we don’t talk anymore, we are no longer partymates,” Pimentel said in an ANC interview, citing how Duterte initially sought a Senate seat by substituting a candidate under the Pederalismo ng Dugong Dakilang Samahan (PDDS).

“When he made the substitution with the PDDS candidate, automatically he became a member of the PDDS party because that’s what the rule says, you can only substitute a candidate if you are from the same party of that same person,” Pimentel explained.

Nevertheless, the senator said he will still support any programs of the President which are seen to be “good for the Filipino people” in the remaining days of his presidency.

“Of course, if there are programs in the remaining days of his term that are good for the Filipino people, yung helping the poorest of the poor. Support po tayo,” he said.

Pimentel, meanwhile, expressed hopes that the Cusi wing’s endorsement of Marcos will not equate to Duterte eventually endorsing the son of former President Ferdinand Marcos, whose dictatorship led to the creation of the PDP-Laban in the 1980s.

“I’m hoping that this is not the endorsement of the President. Because it has actually been Sec. Cusi who has been so politically imaginative for the past how many months…I think this is his style and they always use the media just to maximize the publicity or exposure of their stunts,” the senator said.

“I’m just calling on all the real PDP-Laban members who have been with us for the longest time or a long time and for the new ones who believe in the party principles, if we really know the history of our party, we cannot possibly endorse Ferdinand Marcos Jr,” he added.

The Cusi faction and the PDP-Laban wing led by Pimentel and presidential candidate Senator Manny Pacquiao has been at odds with one another since last year.

Before its endorsement of Marcos, the Cusi wing was left with no standard bearer following the earlier withdrawal of its presidential bets, namely Senator Ronald “Bato” dela Rosa and Senator Bong Go.

The Pimentel wing, for its part, endorsed Pacquiao’s presidential bid.

“We already have an internal dispute. We have expelled these people from the party. I think this move of theirs actually weakens their own faction because not all of those who went with Secretary Cusi will support Marcos for president bringing the PDP-Laban name. So this weakens them,” Pimentel went on.

“We saw that coming. These people have been looking for a presidential candidate to endorse and they have been lost for quite a while,” he added.