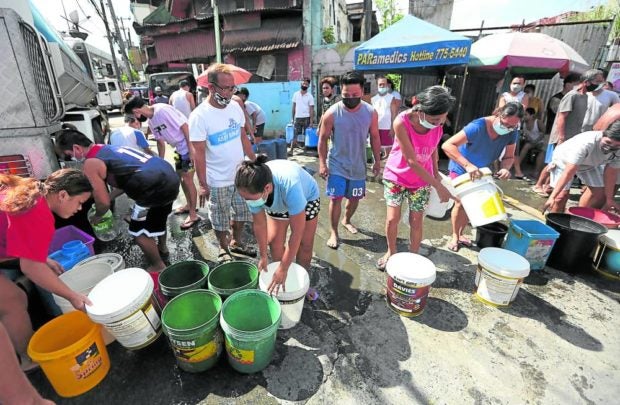 MANILA, Philippines — The National Water Resources Board (NWRB) will decide next week on the water allocation for Metro Manila, amid warnings by the state weather bureau of a possible water shortage in the next few months.

“The [NWRB] will finalize the allocation for April next week,” the board’s Executive Director Sevillo David Jr. told the Inquirer in a text message.

He said they were closely monitoring the water supply situation and will inform the public of any changes.

For now, the Metropolitan Waterworks and Sewerage System (MWSS) continues to get 48 cubic meters per second, David said. The MWSS then distributes the water to its concessionaires Maynilad Water Services Inc. and Manila Water Co.

David said this allocation varies according to the supply in Angat Dam, where Metro Manila and its nearby provinces get their water.

But the Philippine Atmospheric, Geophysical and Astronomical Services Administration (Pagasa) on Tuesday warned that the water level at Angat Dam has been dropping.

In an online climate outlook forum, Pagasa hydrologist Richard Orendain said the water could decrease to less than the minimum operating standard of 180 meters above sea level (masl) by mid-May.

He said this was far from the “normal high water level” of 212 masl.

He noted that there may not be enough rainfall to fill the dam by July, when the rainy season is supposed to have begun.

“There is a possibility of [a] water shortage. Angat supposedly recovers by July, while the southwest monsoon or rainy season is underway. But based on the forecast, below normal rainfall conditions are seen within the Angat watershed by then,” Orendain said.

According to Orendain, “This is quite a huge drop. For the past few days it was an average of .15 to .20 centimeters a day, but today it was .33 centimeters.”

“Maybe we will notice less water pressure from our faucets. We need to start conserving water at this time,” he suggested at the forum.

Malano said cloud seeding operations have been conducted in the Angat river basin area since Monday.

“This is one of our planned activities to reduce the declining water level,” he added.

Angat Dam also provides the allocation for irrigation in farmlands in the provinces of Pampanga and Bulacan, where the dam is located.

But irrigation is cut off when the supply falls below the minimum operating level.

Meanwhile, the two concessionaires as well as the NWRB have appealed to the public for its responsible use of water during the dry season.

Maynilad’s corporate communications chief Jennifer Rufo said the company has “implemented supply augmentation projects to mitigate any shortage from [its] main source, including the activation of deep wells and construction of modular treatment plants….”

“In partnership with NWRB and MWSS, we are optimizing the available water supply so that we can still meet the needs of our customers while, at the same time, preserve the stored water in Angat Dam so it will last throughout summer,” she added.

Jeric Sevilla Jr., head of Manila Water’s Corporate Communication Affairs, said: “We continue to coordinate closely with MWSS and NWRB to ensure continuous supply during these summer months, and we are grateful to them for allowing us to implement additional/augmentation water sources such as the Cardona Water Treatment Plant, deep wells and Marikina Portable Water Treatment Plant.”