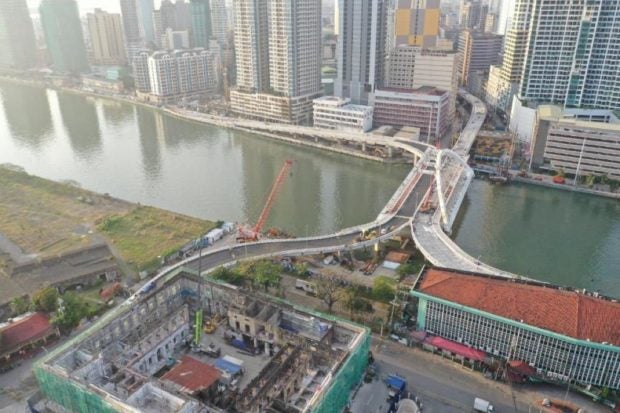 MANILA, Philippines — Senatorial aspirant and former Public Works and Highways (DPWH) Secretary Mark A. Villar said that he will push for the completion and continuation of Metro Manila Logistics Infrastructure Network, a priority program under the Build, Build, Build infrastructure program of the Duterte administration.

These three bridges are a part of the overall Metro Manila Logistics Network. A total of 11 bridges over Pasig River, Marikina River, and the Manggahan Floodway are being eyed for the project.

The Binondo-Intramuros Bridge, the much-talked-about “Friendship” Bridge spanning 807 meters, is a 4.61 B 4-lane, Steel Bowstring Arch Bridge project, which is expected to connect Intramuros at Solana Street and Riverside Drive and Binondo at San Fernando Street.

The Estrella-Pantaleon Bridge, a 1.37 B project, will replace the existing bridge with a 4-lane twin spine steel box girder bridge, spanning 560 meters, to connect Estrella Street in Makati to Barangka Drive in Mandaluyong.

“Ito pong mga proyekto na ito ay mahalaga sa ating mamamayang Pilipino, once all the bridges and links are up the end result is that EDSA will go back to its original capacity. My advocacy is to ensure the completion of projects like this. Ito po ay makakatulong sa ating mga kababayan at makakapagpalago ng ekonomiya at turismo ng bansa”, Villar ended.

Villar is vying for a Senate seat in the upcoming May 2022 national and local Elections.

Villar says of CDO: You’re close to my heart; infra projects will be completed